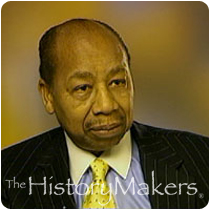 See how Chester Blair is related to other HistoryMakers

Attorney Chester L. Blair was born in Streetman, Texas on July 2, 1928. Blair left home at an early age to seek greater opportunity in the state of Washington. After falling ill from manual labor, Blair returned to Texas to complete high school. Deciding that he wanted to become a lawyer, he arrived in Chicago in April 1947 with a letter of introduction to the famous lawyer Euclid Taylor.

After working as a busboy and attending Fisk University for one year, Blair was hired by the post office and transferred to Chicago State University. He received his B.Ed. in 1952 and taught for the Chicago Public Schools for seven years. While teaching, he pursued master's level work at Roosevelt University and went on to earn a J.D. in 1959 from the John Marshall Law School, where he excelled in real estate law.

See how Chester Blair is related to other HistoryMakers
Click Here To Explore The Archive Today!