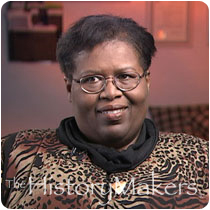 See how Cheryl Saunders is related to other HistoryMakers

Cheryl Eileen Saunders was born on May 7, 1955 in Hattiesburg, Mississippi to Lula Roberts and Isaac London. The oldest of four children, Saunders (then Roberts) stayed close to her family for many years, attending college in her hometown. Saunders has brought a unique perspective to music education.

Upon graduating from Blair High School in 1972, Saunders continued her education at the University of Southern Mississippi in Hattiesburg. She earned a bachelor's degree in music education in 1977 and a master's degree in music from the same school in 1983. In 1989, Saunders left the United States for England, serving as a facilitator and arts consultant for the Creative Futures Music Consulting Group and a teacher of mathematics and music for the Reading Borough Council. Saunders organized and conducted the Royal Liverpool Philharmonic Gospel Choir, coordinated a U.S. servicemen's seminar of Germany, and organized a music program at the multicultural Coley Primary School in Reading, England. There, she helped children compose music.

Returning to the United States, Saunders became a doctoral candidate in the field of educational leadership at the University of North Dakota-Grand Forks in 1996. Saunders began consulting the university in 1997 while presenting at international music workshops. She showed the differences and similarities between Western and African American music, especially focusing on the history of church music. In 1998, teaching for the first time in a college setting, Saunders lectured at the University of North Dakota and the Northwest Technical College in East Grand Forks, Minnesota on the issues of multiculturalism. She also became the interim center coordinator for the Era Bell Thompson Cultural Center, which provides support for students of all ethnicities. Saunders has been married to Lee R. Saunders since 1980. They have two children, Jasmine and Joshua.

See how Cheryl Saunders is related to other HistoryMakers
Click Here To Explore The Archive Today!