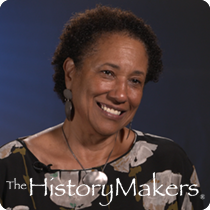 See how Cheryl Johnson-Odim is related to other HistoryMakers

Academic administrator and activist Cheryl Johnson-Odim was born on April 30, 1948 in Youngstown, Ohio to Elayne Jeffries and Robert Dawson. She graduated from Andrew Jackson High School in New York in 1966 and went on to attend the City College New York and Youngstown State University. From 1972 to 1978, she did graduate work at Northwestern University from which she received her Ph.D. in history in 1978. In 1975, Johnson-Odim was a Fulbright Scholar in Nigeria.

Johnson-Odim was a founding member of the Free South Africa Movement. She served as head of the TransAfrica Support Committee in Chicago as well as head of all TransAfrica Support Committees in the U.S. In the early 1980s, she served as co-founder and co-chair of the Coalition for Illinois Divestment from South Africa. In 1995, Johnson-Odim became the first woman and first African American to chair the history department at Loyola University Chicago, where she had taught history since 1987, and a position she held until 2000. Previously, she taught at the University of Wisconsin-Madison and Northwestern University, where she served as the assistant director of the Program of African Studies from 1980-86. In 2000, Johnson-Odim was appointed the first dean of the School of Liberal Arts and Sciences at Columbia College Chicago. In 2006 she was appointed provost and senior vice president for academic affairs at Dominican University in River Forest, Illinois.

Johnson-Odim was an associate editor for Women Building Chicago 1790-1990: A Biographical Dictionary, which was published in 2001; and the Encyclopedia of Twentieth-Century African History, which was published in 2003. She also edited Expanding the Boundaries of Women’s History: Essays on Women in the Third World, and authored the books For Women and the Nation: Funmilayo Ransome-Kuti of Nigeria, and Women and Gender in the History of Sub-Saharan Africa commissioned by the American Historical Association, as well as many chapters in books and articles in scholarly journals.

Johnson-Odim served as vice chair of the Illinois Humanities Council, chair of the American Historical Association’s Joan Kelly Prize Committee, member of the board of directors of the American Council of Learned Sciences, and the African Studies Association, of which she was a co-founder of the Women' Caucus. She was also a founding editorial board member of the Journal of Women’s History and chair of the Board of Trustees for the Higher Learning Commission. And she was on the central organizing committee of the Women's March Chicago in January 2017.

Cheryl Johnson-Odim was interviewed by The HistoryMakers on July 16, 2017.

See how Cheryl Johnson-Odim is related to other HistoryMakers