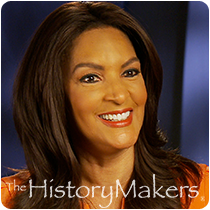 See how Cheryl Burton is related to other HistoryMakers
Donate Now

Broadcast journalist Cheryl Burton was born on December 25, 1962 in Chicago, Illinois to Hattie and Simpson Burton. She graduated from Chicago's Lindblom Technical High School in 1980, and then received her B.S. degree in psychology and biology from the University of Illinois at Champaign-Urbana in 1984.

Burton was first seen on television on Romper Room and as a contestant on Star Search. She then hosted an hour long cable television show entitled Simply Elegant and worked as a special education teacher for two years. In 1989, she was hired at WGN-TV in Chicago, Illinois, where she co-anchored “MBR: The Minority Business Report,” a nationally syndicated weekly series. In 1990, Burton moved to Peoria, Illinois, and worked as a reporter at WMBD-TV. From 1990 to 1992, she served as an anchor for KWCH-DT in Wichita, Kansas, where she also hosted the talk show Viewpoint. Burton then joined Chicago’s WLS-TV ABC 7 as a weekend co-anchor and reporter in November of 1992. In 2003, she was promoted to 5 p.m. weekday co-anchor and 10 p.m. contributing anchor for WLS-TV’s newscasts.

Burton has received numerous honors for her work, including three Chicago Association of Black Journalists awards; the 1997 Phenomenal Woman Award from the Expo for Today's Black Woman; a 1998 Kizzy Image and Achievement Award; the 2004 and 2005 Thurgood Marshall Awards; the Vernon Jarrett Par Excellence Award in Journalism; the coveted 2008 National Association of Black Journalists (NABJ) Salute to Excellence International Award; 2009’s Proctor and Gamble Pioneer Award for community service; and several Emmy Awards. She was also the first recipient of the 2005 "Sisters in the Spirit" Award, given by Chicago area gospel singers to persons who exemplify a faith-based life, and was the first alumnus to be inducted into the Robert Lindblom High School’s hall of fame in 2007.

Burton is a volunteer for the Boys and Girls Club of America and serves as a motivational speaker for the Chicago Public Schools. She serves on the boards of the Life with Lupus Guild, the Multicultural Dance Center and City Year. In addition, Burton is a member of the Society of Professional Journalists, the Chicago Association of Black Journalists and the National Association of Black Journalists.

Cheryl Burton was interviewed by The HistoryMakers on May 20, 2014.

See how Cheryl Burton is related to other HistoryMakers
Donate Now
Click Here To Explore The Archive Today!