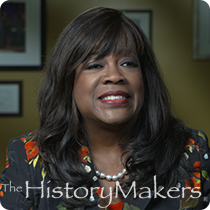 Lawyer and entertainment manager Chaz Ebert was born on October 15, 1952 in Chicago, Illinois to Johnnie Hobbs Hammel and Wiley Hammel, Sr. She attended John M. Smyth Elementary School and Crane Technical High School in Chicago, Illinois and graduated in 1969. Ebert earned her B.A. degree in political science at the University of Dubuque in Dubuque, Iowa in 1972. She then received her M.A. degree in social science at the University of Wisconsin-Platteville in Platteville, Wisconsin. Ebert went on to receive her J.D. degree from DePaul University College of Law in Chicago.

Ebert began her career in 1977 as a litigator for the Region Five office of the U.S. Environmental Protection Agency. After three years, she left the agency to join the litigation department at the Chicago law firm of Bell Boyd and Lloyd LLP, where she focused on mergers and acquisitions and intellectual property. Ebert then began working at the Equal Employment Opportunity Commission. Her work there focused primarily on race and age-based workplace discrimination. In 1989, she became the vice president of Ebert Company Ltd., where she oversaw daily operations and provided legal counsel for the company. In 1992, she married film critic Roger Ebert and continued to play an important role in the company over the following two decades, and often traveled with her husband and his business partner, film critic Gene Siskel. When Siskel passed away in 1999, Ebert encouraged the partnership between her husband and Chicago Sun Times columnist Richard Roeper. In 2002, Ebert launched rogerebert.com, an online magazine of film reviews by Roger Ebert and other critics. After her husband’s death in 2013, Ebert revamped the website under the company Ebert Digital. She also worked on the documentary of her late husband’s life called Life Itself.

Chaz Ebert was interviewed by The HistoryMakers on August 7, 2017.