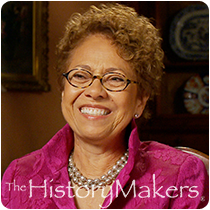 See how Charlynn Goins is related to other HistoryMakers

Civic leader and business executive Charlynn Goins was born on September 15, 1942 in New York City, New York. Her mother was Charlotte Wilson, a model and book seller; her step-father, Clifford Wilson, was a United States Army captain and postal worker. Growing up in New York, Goins graduated from Briarcliff Manor High School in 1959. She then attended Barnard College, where she received her A.B. degree in government studies in 1963. From 1963 to 1964, Goins completed graduate courses at the Teachers College at Columbia University. In 1976, she received her J.D. degree from Columbia University Law School.

Goins was hired as a tax lawyer in 1976 at the law firm Proskauer, Rose, Goetz & Mendelsohn, now Proskauer Rose LLP. Then, in 1982, she left the practice of law and joined Integrated Resources, Incorporated, as the assistant to the president. In 1986, Goins was promoted to chief operating officer of a new Integrated Resources subsidiary. She worked in that role until 1990, when she was hired as the senior vice president and director of international marketing at Prudential Mutual Funds and Annuities. In 1997, Goins retired from Prudential and began serving as a consultant to the United States Department of Commerce’s Minority Business Development Agency. Then, in 2004, New York City Mayor, Michael Bloomberg, named her the first African American woman chairperson of the board of directors for the New York City Health and Hospitals Corporation.

Goins has served as a board member of numerous organizations. From 2001 through 2004, she served on the boards of the Community’s Bank and its holding company, the Urban Financial Group. From 2001 through 2006, Goins was a member of the board of Mainstay Funds. In 2002, she was elected to the New York Community Trust’s Distribution Committee, where she went on to serve as chairman. In 2006, Goins was named to the board of directors of AXA Financial, Incorporated, and its subsidiaries AXA Equitable Life and MONY Life. Then, in 2008, she was elected to Fannie Mae’s board of directors. Goins has also served on various other boards including Continuum Health Partners, Beth Israel Hospital, St Luke’s-Roosevelt Hospital Center, FOJP Service Corporation, New York City Global Partners, the Council on Foreign Relations, the Brooklyn Museum of Art, and the Gracie Mansion Conservatory. She was honored in 2008 by Mayor Bloomberg with the installment of “Charlynn Goins Day.” Goins was also awarded the United Hospital Fund Trustee Award in 2008.

Goins lives in New York with her husband, Dr. Warren Goins. They have two children: Hilary and Jeffrey.

Charlynn Goins was interviewed by The HistoryMakers on October 21, 2013.

See how Charlynn Goins is related to other HistoryMakers
Click Here To Explore The Archive Today!