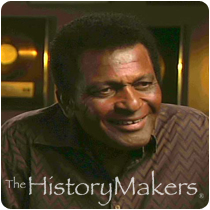 See how Charley Pride is related to other HistoryMakers
Donate Now

Charley Frank Pride was the fourth of eleven children born to sharecroppers Tessie and Fowler McArthur Pride in Sledge, Mississippi on March 18, 1938. Pride’s father named him Charl, but the midwife wrote Charley on his birth certificate and the name stuck. It was from the family’s Philco radio that Pride learned to love country music. He picked cotton alongside his parents as a young boy and saved enough money to buy a Silverstone guitar from Sears and Roebuck. Though Pride loved to sing, it was baseball that lured him first. Pride ended his schooling at the eleventh grade when his parents gave their permission for him to leave home to play baseball in 1953.

By 1954, Pride was signed with the Memphis Red Socks, a Negro League baseball team. He went on to play for a number of teams including the Louisville Clippers and the Birmingham Black Barons. Two years later, he was drafted and married his sweetheart, Rozene, while in the U.S. Army. They settled in Montana where Pride found steady work and also played semi-pro baseball. However, he never quite made the grade for the major leagues. After a final tryout for the New York Mets, Pride returned home to Nashville, Tennessee. He met Jack Johnson who heard his music and sent him home with the promise that he would land him a management contract. A year later, Pride returned to Nashville where he was introduced to Jack Clements, who had him record two songs that landed in the hands of RCA Records executive Chet Atkins. Pride was signed to his record label.

Pride’s first single record hit the airwaves in 1966. He had his first number one hit, “All I Have To Offer You (Is Me)”, on the Cash Box Country Singles Chart in 1969. Over three decades, Pride has remained one of the top twenty best-selling country artists of all-time. His incredible legacy includes: thirty-one gold and four platinum albums; one which has reached quadruple platinum (The Best of Charley Pride). Pride is second in sales for RCA Records only to Elvis Presley.

In 1994, Pride published his autobiography, Pride: The Charley Pride Story.
On May 1, 1993, Pride accepted the invitation to join the Grand Ole Opry. This made him the first African American inducted into the Grand Ole Opry. In 1994, Pride received the Academy of Country Music’s Pioneer Award; The Trumpet Award for Outstanding African American Achievement in 1996 and was the headliner for a special Christmas performance at the White House for former President Clinton and Mrs. Clinton.

Pride lives in Dallas with Rozene, his wife of 50 years. They have raised two sons and a daughter.

See how Charley Pride is related to other HistoryMakers
Donate Now
Click Here To Explore The Archive Today!