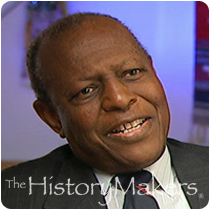 See how Charles Willie is related to other HistoryMakers
Donate Now

Educator and social activist Charles Vert Willie was born in Dallas, Texas, on October 8, 1927. Willie attended Morehouse College and graduated in 1948. The following year, he received a master's degree from Atlanta University and in 1957, he obtained a Ph.D. in sociology at Syracuse University. At Syracuse University, Willie served as chair of the Department of Sociology and Vice President of the University, at a time when African Americans were not holding such positions. He then was hired by Harvard University in 1974 where he served as the Charles William Eliot Professor of Education at the Graduate School of Education.

Charles Willie is one of the nation's leading black sociologists. His expertise is in the area of school desegregation. Accordingly, Willie served as a court-appointed master, expert witness, and consultant in many school desegregation cases. In 1975, Willie served as a court appointed master in the Boston school desegregation case and later was retained to develop a controlled choice student assignment plan for Boston and several school districts. He was recognized in 1983 with the Society for the Study of Social Problems' Lee-Founders Award for effectively combining social research and social activism.

Willie is an applied sociologist concerned with solving social problems. Willie is the author or editor of more than 25 books and articles covering topics such as: race relations, urban education, public health, community development, family life, and women's rights. His books include A New Look at Black Families (1976), The Education of African-Americans (1991), Theories of Human Social Action (1994), and Mental Health, Racism and Sexism (1995). Willie has served as Vice President of the American Sociological Association and as President of the Eastern Sociological Society. In addition, he has served on the board of directors of the Social Science Research Council; the technical advisory board of the Maurice Falk Medical Fund; and, by the appointment of President Carter, the President's Commission on Mental Health.

Willie recently retired from Harvard University's Graduate School of Education and was awarded emeritus status by the faculty.

See how Charles Willie is related to other HistoryMakers
Donate Now
Click Here To Explore The Archive Today!