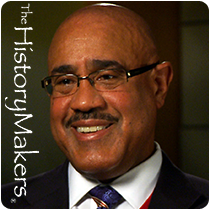 See how Charles Warfield, Jr. is related to other HistoryMakers

Broadcasting executive Charles M. Warfield, Jr. was born in in Washington, D.C. in 1949. Warfield attended Hampton University and graduated from there with his B.S. degree in accounting in 1971.

Upon graduating, Warfield began his career as a staff auditor at Ernst & Young, and then joined RCA Corporation as supervising senior auditor in 1974. Warfield’s broadcasting career includes managing some of New York City’s top radio stations including twelve years at Inner City Broadcasting Corporation (ICBC). He joined ICBC as a corporate controller and was promoted to vice president and general manager of WBLS-FM and WLIB-AM Radio. Warfield was later hired at Summit Broadcasting Corporation, where he served as vice president and general manager of WRKS-FM Radio in New York City.

In July of 1997, Warfield was appointed as the vice president and general manager of heritage stations at WDAS-AM/FM in Philadelphia, Pennsylvania. He later became the senior vice president of urban regional operations for Chancellor Media Corporation in March of 1998, with oversight of KKBT-FM in Los Angeles, California; WJLB-FM and WMXD-FM in Detroit, Michigan; WGCI-AM/FM and WVAZ-FM in Chicago, Illinois; WUSL-FM and WDAS-FM in Philadelphia, Pennsylvania; and WEDR-FM in Miami, Florida. Warfield was promoted to senior vice president of regional operations in October of 1998, and assumed responsibility for Chancellor Media Corporation’s thirty stations in Chicago, Cleveland, Philadelphia, Atlanta, Miami and Puerto Rico. From 1997 to 2003, Warfield served as senior vice president of regional operations for AMFM, Inc.; and, from 2000 to 2012, he served as vice president and chief operating officer of Inner City Broadcasting Holdings, Inc. In October of 2012, Warfield was named president and chief operating officer of YMF Media, LLC.

In 2009, Warfield was elected president of the Metropolitan Kalamazoo Branch of the NAACP. The following year, he was appointed as the chairman for the National Association of Broadcasters board of directors. He also served on the Radio Advertising Bureau Executive Committee. Warfield’s community involvement includes organizations such as the American Red Cross, the National Urban League, the Salvation Army, the United Negro College Fund, the Partnership for a Drug Free Greater New York and the Harlem Young Men’s Christian Association. In 2010, Warfield received the National Radio Award from the National Association of Broadcasters.

Charles M. Warfield Jr. was interviewed by The HistoryMakers on December 9, 2013.

See how Charles Warfield, Jr. is related to other HistoryMakers
Click Here To Explore The Archive Today!