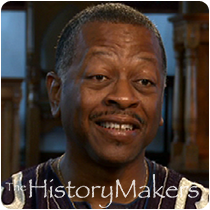 Favorite Color:
Purple
Favorite Food:
Scallops
Favorite Vacation Spot:
West Africa or the Caribbean
Favorite Quote:
Free Your Mind And Your Ass Will Follow, For the Kingdom of Heaven Is Within

Favorite Color:
Purple
Favorite Food:
Scallops
Favorite Vacation Spot:
West Africa or the Caribbean
Favorite Quote:
Free Your Mind And Your Ass Will Follow, For the Kingdom of Heaven Is Within

See how Charles W. Cherry II is related to other HistoryMakers
Donate Now

Publisher, radio station manager and lawyer Charles W. Cherry II was born in 1956 in Daytona Beach, Florida to Julia T. Cherry and Charles W. Cherry, Sr., founder of the Daytona Times and Florida Courier newspapers. In 1978, Cherry received his B.A. degree in journalism from Morehouse College, where he also interned for WAGA-TV in Atlanta, Georgia. He then went on to receive both his M.B.A. and J.D. degrees from the University of Florida in 1982.

Cherry had his own law firm for twenty-one years and served as a city prosecutor for Fort Lauderdale, Florida and as a state prosecutor in South Florida. He also served as general counsel for the Housing Authority of the City of Fort Lauderdale, where he worked closely with its former executive director, the late Dr. William H. Lindsay. In 1989, Cherry and his father purchased WPUL-AM 1590, a Daytona Beach-area radio station. From 1998 to 2000, he served as general manager of Greenville, South Carolina’s WCSZ-AM. In 2000, Cherry was named general manager of WPUL-AM and became host of the station’s Free Your Mind radio show.

In 2004, upon the death of his father, Cherry returned to journalism and newspaper publishing. In 2006, the Cherry family re-launched the Florida Courier as a statewide newspaper; Cherry became its publisher and his column, Straight, No Chaser appeared weekly. He also went on to write commentaries, editorials, and stories for his other family-owned newspaper, the Daytona Times. In addition, Cherry served as vice president, secretary and general counsel of his family’s Tama Broadcasting, Inc., as well as vice president of corporate communications for Global Health Professionals, Inc.

Cherry published Excellence Without Excuse: The Black Student's Guide to Academic Excellence (1994), which has been used as a textbook in college-preparation classes and seminars. He was elected to the board of directors of the National Newspaper Publishers Association in 2009, and served on the Government Affairs Committee of the Florida Press Association. He also founded the Florida Black-Owned Media Coalition, Inc., a trade association representing Florida mass media owned by African Americans.

Charles W. Cherry II was interviewed by The HistoryMakers on September 7, 2014.

See how Charles W. Cherry II is related to other HistoryMakers
Donate Now
Click Here To Explore The Archive Today!