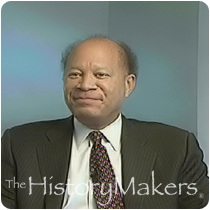 See how Charles Tribbett is related to other HistoryMakers

Executive recruiter Charles Tribbett III was born on October 25, 1955, in Alexandria, Louisiana, to Charles Tribbett, Jr. and Dorris Morris Tribbett. Raised in the Chatham and Pill Hill neighborhoods of Chicago, Illinois, Tribbett attended Neil Elementary School, St. Dorothy’s Catholic School, and graduated from Mendel Catholic High School in 1973. He received his B.S. degree in political science from Marquette University in 1977 and his J.D. degree from the University of Virginia Law School in 1980.

Starting his career as a securities attorney, Tribbett worked for Reid and Priest; Mayer, Brown, and Platt; and Skadden, Arps, Slate, Meagher and Flom. Tribbett became a partner at Abraham and Sons, a Chicago-based brokerage and investment management group, before joining the executive search firm of Russell Reynolds Associates in 1989. He is now co-leader of the firm’s CEO and Board Services Practice, specializing in CEOs, boards of directors, and diversity assignments.

A former chairman of the board for Chicago’s McCormick Place convention center, in 2005 Tribbett was elected to the board of directors for the Northern Trust Company. Fortune magazine named Tribbett one of the 50 most powerful African American executives.

Charles and his wife Lisa reside in Chicago and have 3 adult children.

Tribbett was interviewed by The HistoryMakers on March 21, 2005.

See how Charles Tribbett is related to other HistoryMakers
Click Here To Explore The Archive Today!