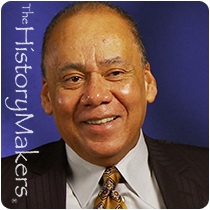 See how Charles Thomas is related to other HistoryMakers

Broadcast journalist Charles Thomas was born on May 3, 1951 in Webster Groves, Missouri to Clarence and Oneida Thomas. He grew up in the St. Louis area and graduated with his B.A. degree from the University of Missouri’s School of Journalism in 1973.

Upon graduation, Thomas was hired as a broadcast journalist, and worked as a reporter in Kansas City, Missouri before being hired at KGO-TV in San Francisco, California in 1978. In 1982, he was hired as a reporter for WCAU-TV in Philadelphia, Pennsylvania. Then, in 1986, Thomas joined WTAF-TV as a general assignment reporter until 1988, when he joined the ABC News bureau in St. Louis, Missouri as a Midwest correspondent. Thomas was then hired as a general assignment reporter by ABC 7 News in Chicago in 1991.

Thomas has worked for ABC 7 on the O.J. Simpson trials, the Oklahoma City bombing, the Rodney King trials, and the Chicago White Sox 2005 World Series Championship. He has reported from Europe and Asia for ABC 7, and, in 2006, accompanied then U.S. Senator Barack Obama to Africa. In all, Thomas has traveled to every state in the United States and to five continents during his journalism career. In 2009, he was promoted to the position of political reporter at ABC 7.

Thomas and his wife Maria live in downtown Chicago. They are the parents of two adult sons and one adult daughter.

Charles Thomas was interviewed by The HistoryMakers on January 24, 2014.

See how Charles Thomas is related to other HistoryMakers
Click Here To Explore The Archive Today!