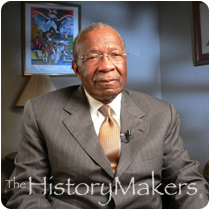 See how Charles Teamer, Sr. is related to other HistoryMakers
Donate Now

Teamer worked in the office of the business manager at South Carolina State University in 1954. He then became assistant business manager at Tennessee State University in 1958; and, in 1962, Teamer was hired as business manager at Wiley College. In 1965, Teamer became vice president of finance at Dillard University and was promoted to chief financial officer in 1968. In 1983, he was appointed by Louisiana Governor David Treen as the first African American on the Board of Commissioners of the Port of New Orleans. From 1985 to 1988, Teamer served as the national president of Alpha Phi Alpha fraternity. In 1993, Teamer co-founded the Dryades Savings Bank and served as chairman. He later retired from Dillard University in 1997, and continued to work as a consultant to Clark Atlanta University. In 2001, Teamer led a partnership of investors in opening The Cotton Exchange and Holiday Inn Express Hotel in downtown New Orleans, and became president of the World Trade Center of New Orleans in 2003.

Former executive director of the Amistad Research Center and a consultant to the U.S. Department of Education, Teamer has held numerous board appointments on the Board of Education of the United Methodist Church, the Ford Foundation, the Southern Association of Colleges and Schools, the Common Fund, the National Association of Colleges and University Business Officers, the Ochsner Medical Foundation and the Audubon Institute. Teamer also served as board chair for the Urban League of Greater New Orleans, the Metropolitan Area Committee, Harrah’s New Orleans Casino, the Greater New Orleans Foundation and the United Way. He was a member of the business and higher-education council for the University of New Orleans and served on the board of the Southern Education Foundation. Teamer was president of the Southern Association of College and University Business Officers and vice president of fiscal affairs at Dillard University and Clark Atlanta University. He was a member of the board of supervisors for the University of Louisiana System and was on the board of administrators of Tulane University. Teamer was also the director of Entergy New Orleans.

See how Charles Teamer, Sr. is related to other HistoryMakers
Donate Now
Click Here To Explore The Archive Today!