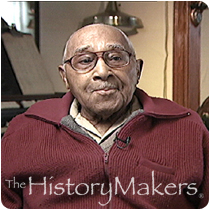 See how Charles Stewart, III is related to other HistoryMakers

Electrician and organizer Charles Vernon Stewart was born August 7, 1910, in Tuscaloosa, Alabama. Raised in Omaha, Nebraska, and Chicago, Illinois, Stewart attended Dore Elementary School, Phillips High School and was the first African American admitted into Greer College, a trade school for electricians. Determined to succeed, Stewart, at eleven years of age, alongside his stepfather, Sam Taylor, formed an underground educational effort to learn the trade of electricians, a trade that blacks were not allowed to practice. Stewart and Taylor had a Greek friend who helped them by ordering electrical home study magazines for them because the publishers refused to mail copies to blacks. The group successfully completed each test they took and soon began working alongside other black electricians in Chicago. In 1922, Stewart helped his stepfather establish Taylor Electric Company, and in 1927, he graduated from Greer College.

Stewart was hired by Berry Electric in 1942 and soon became the first black foreman for one of the largest electrical contractors in Chicago. Stewart built a racially integrated team of electricians capable of completing large jobs, such as the Jewell Grand Bazaar. Stewart also built the electrical source box for the River Oaks Shopping Mall in Calumet City, Illinois. Stewart, who retired from Berry Electric after thirty-seven years, remained a resident of Chicago’s south side.

Charles Stewart passed away on February 13, 2006 at the age of ninety-five.

See how Charles Stewart, III is related to other HistoryMakers
Click Here To Explore The Archive Today!