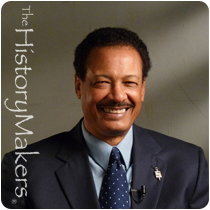 Historian Charles Russell Branham was born on May 25, 1945 in Chicago, Illinois to Charles Etta Halthon and Joseph H. Branham. Branham graduated from Manassas High School in Memphis, Tennessee in 1963. He graduated Phi Beta Kappa from Rockford College in 1967 and earned his Ph.D. in history in 1980 from The University of Chicago where he was a Ford Foundation Fellow.

Branham has been a professor of history at various colleges in Chicago, including Chicago State University and Roosevelt University. From 1974 through 1985, he taught at The University of Illinois at Chicago where he was awarded the Silver Circle Excellence in Teaching Award. From 1985 through 1991, Branham was an Associate Professor at Northwestern University, and from 1991 through 1997, an Associate Professor at Indiana University Northwest. In 1984, Branham began working as an historian at the DuSable Museum of Afro-American History where he served as Director of Education and is now Senior Historian. Branham is the author of many publications on African American history and politics, including The Transformation of Black Political Leadership in Chicago, 1865 – 1943.

Branham is a member of the Organization of American Historians and the Association for the Study of Afro-American Life and History. He served on the Board of Directors for The Chicago Metro History Fair, DuSable Museum of African American History, the Illinois Humanities Council and on the Executive Committee for the Chicago Archives of the Blues Tradition. From 1989-1990, he was the Chairman of the United Way of Chicago’s Committee on Race, Ethnic and Religious Discrimination. In addition, Branham has served as a consultant to the Chicago Board of Education for their curriculum development for a Black History study unit. Branham also sat on the Board of Trustees for Rockford College from 1990 to 1992. He won an Emmy Award as the writer, co-producer and host of "The Black Experience," the first nationally televised series on African American History. In 1983, Branham was an expert witness in the PACI case which forced the City of Chicago to give greater political representation to African Americans, and in 1990, his testimony before the Chicago City Council laid the foundation for the city's minority business affirmative action program.

Branham was interviewed by The HistoryMakers on November 3, 2008.

See how Charles Russell Branham is related to other HistoryMakers
Donate Now
Click Here To Explore The Archive Today!