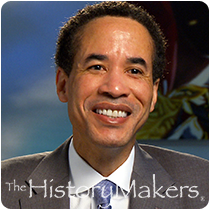 See how Charles Phillips, Jr. is related to other HistoryMakers

Corporate executive Charles E. Phillips, Jr. was born in June of 1959 in Little Rock, Arkansas. He attended the United States Air Force Academy, where he received his B.S. degree in computer science in 1981. Phillips served first as a second lieutenant, and then as captain in the United States Marine Corps, 2nd Battalion, 10th Marines from 1981 to 1986 at Camp Lejeune in Jacksonville, North Carolina. He received his M.B.A degree from Hampton University in 1986 and his J.D. degree from the New York Law School in 1993.

He serves on the boards of Infor, Viacom Corporation, Jazz at Lincoln Center, New York Law School, the American Museum of Natural History, the United States Air Force Academy Endowment Fund, and Posse Foundation. Phillips is also a board member of his family foundation, Phillips Charitable Organizations, which provides financial aid for single parents, students interested in engineering, and wounded veterans. In February 2009, he was appointed as a member of the President's Economic Recovery Advisory Board in order to provide U.S. President Barack Obama and his administration with advice and counsel in addressing the late-2000s recession.

Phillips was recognized by Institutional Investor magazine as the Number One Enterprise Software Industry Analyst from 1994 to 2003. He was also named by Black Enterprise magazine as one of the Top 50 African Americans on Wall Street in 2002.

Charles Phillips was interviewed by The HistoryMakers on April 11, 2014.

See how Charles Phillips, Jr. is related to other HistoryMakers
Click Here To Explore The Archive Today!