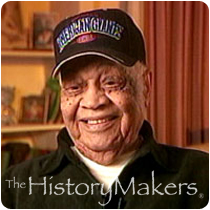 See how Charles Johnson is related to other HistoryMakers
Donate Now

Former Negro League baseball player Charles Johnson has fought against discrimination for most of his long life. Born on August 7, 1909, in Pine Bluff, Arkansas, Johnson never knew his father. He lived with his mother, uncle and grandmother, bouncing back and forth between Arkansas; Kansas City, Missouri; and St. Louis. Johnson moved to Chicago in 1925 to be with his dying mother, and from age fifteen lived on his own. He worked at a grocery store on the South Side and became acquainted with Negro League great Ted "Double Duty" Radcliffe.

In 1930, Johnson went on his first barnstorming tour of Canada with the Texas Giants, and went with the team again in 1931. When he returned home to Chicago, the Great Depression had set in, forcing Johnson to rely on bread lines and flop houses to subsist. He later joined the famed Chicago American Giants of the Negro League, pitching and playing outfield. When not playing baseball, Johnson worked in stockyards, and in 1940 took a job in electroplating. Johnson was married in 1942, and his wife, Julia, forced him to give up traveling with the Giants. He finally quit playing in the Negro Leagues in 1944.

Johnson went to work for the Illinois Central Railroad Company in 1951 as a porter, lured by its pension plan. He became an active member of his union and helped file a lawsuit against the railroad in 1965 for discrimination. After five years of litigation, the railroad relented and he became the first African American special agent for the IC. Johnson retired from the railroad in 1974. Since retiring, Johnson has worked to get himself and 140 other former Negro League players accepted into a pension fund established by the Major League Baseball Players Association. Though the fund was created to provide assistance to elderly Negro Leaguers, Johnson and others have not been able to receive support checks from it.

See how Charles Johnson is related to other HistoryMakers
Donate Now
Click Here To Explore The Archive Today!