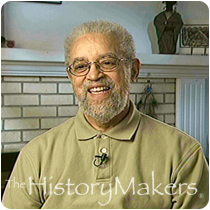 See how Charles Holton is related to other HistoryMakers

Former Harlem Globetrotter Charles Holton was born on September 3, 1930 in Milwaukee, Wisconsin to Alice and Frank Holton. Holton attended St. Benedict School in Milwaukee, where he was a good athlete and played basketball. He graduated in 1948 at the age of eighteen. Holton was the first black to graduate from St. Norbert College in De Pere, Wisconsin with a B.S. in economics in 1952. Holton became a member of the Harlem Globetrotters, the then Chicago-based basketball franchise headed by legendary coach William “Pop” Gates.

Invited to tryout for the Harlem Globetrotters at Chicago’s St. Anselm’s Gym, Holton became a member of the Abe Sapperstein’s Globetrotters, the popular barnstorming Chicago-based basketball franchise. He became a Harlem Globetrotter during their glory years (between 1951 and 1957) and witnessed first hand the passing of the comic basketball star baton from Reese “Goose” Tatum to Meadowlark Lemon. Holton made the Southern Harlem Globetrotters, one of three traveling squads. His teammates included Leon Hilliard, Junior Lee, Chico Burrell and Babe Pressley. In 1954, Holton and the Globetrotters were warmly welcomed in Europe and later in South America. Holton left the team at the age of twenty-seven in 1957.

Holton began working in social services as an administrator for Milwaukee County the following year, a position he would retain until 1966. In 1967, Holton obtained his M.S.W. degree from the University of Michigan and began working for the State of Wisconsin as a social services administrator, where he would remain until 1996. In 1997, Holton became executive director of Milwaukee’s House of Peace, a Capuchin Franciscan Ministry that Holton would lead until retirement in 2000.

Holton lives with his wife, Carol S. Oakes, whom he married in 1969. His daughter is Miss Lori the public television children’s host and his uncle is Chicago police commander and award winning mystery writer, Hugh Holton.

Holton was interviewed by The HistoryMakers on November 29, 2007.

See how Charles Holton is related to other HistoryMakers
Click Here To Explore The Archive Today!