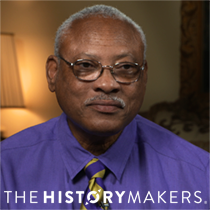 See how Charles "Fred" Hearns is related to other HistoryMakers

Municipal official Charles “Fred” Hearns was born on November 28, 1948 in the Bronx, New York to Grace Tillman Clark and Samuel Hearns. He attended College Hill Elementary School, Booker T. Washington Junior High School and George S. Middleton High School in Tampa, Florida. Hearns went on to receive his B.A. degree in English journalism from the University of South Florida in Tampa in 1970 and his M.A. degree from Springfield College Tampa Bay in 2011. He later obtained his second M.A. degree, this time in African American studies from the University of South Florida in 2014.

In 1970, Hearns briefly worked as a newspaper reporter for the Fort Lauderdale Sun Sentinel in Fort Lauderdale, Florida before returning to Tampa to accept a position as general news editor at the Florida Sentinel Bulletin. In 1971, Hearns became the sports information director for Southern University in Baton Rouge, Louisiana. He remained there until 1974, when he returned to Tampa to work in the city’s Department of Community Affairs. Hearns worked for the city in this department for over thirty-two years, beginning as a community relations representative and working his way up to director. During his tenure, Hearns worked on several major projects including the reestablishment of his high school alma mater, and as a consultant for the revitalization of the Perry Harvey, Sr. Park project. He was also a founding member of several civic organizations in the city such as the 78th Street Improvement Association, the Ada T. Payne Friends of the Urban Libraries and the Robert W. Saunders Library Foundation, Inc. In 2005, Hearns started his own tourism business, Fred Hearns Tours, LLC, which included both bus and walking tours of Tampa’s African American history. The next year, he wrote an autobiographical book, ‘Getting It Done: Rebuilding Black America Brick By Brick.’

Hearns served as president of the local chapter of the Association for the Study of African American Life and History and was a longtime member of the NAACP, the Tampa Urban League and Omega Psi Phi Fraternity, Inc. He also worked as a consultant for the ENCORE housing project in Tampa. Hearns served on the Friends of the Riverwalk committee and on the Florida Advisory Committee of the U.S. Commission on Civil Rights. In 2014, he was awarded the Robert Saunders Award for Community Service.

Charles “Fred” Hearns was interviewed by The HistoryMakers on September 11, 2018.

See how Charles "Fred" Hearns is related to other HistoryMakers