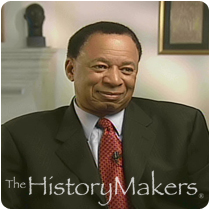 Charles Floyd Johnson was born in Camden, New Jersey, to Bertha Ellen Seagers, a teacher, and Orange Maull Johnson, who went off to fight in World War II shortly before Johnson was born and returned to tell his son stories of the Tuskegee Airmen, although he himself was in the American cavalry in North Africa. Johnson's family initially encouraged him to be a lawyer; in order to give him the best possible educational preparation he was sent to Stony Brook in 1956 where he became the second African American student to attend the prestigious school. Johnson was an ambitious student, and was accepted at both Howard and Brown Universities after his graduation from Stony Brook.

In 1958, Johnson began attending Howard University alongside some well-known classmates that included Stokely Carmichael. Johnson worked in New York during the summers as a teacher for young children. During the Civil Rights Movement, Johnson was active in marches; he majored in political science, minored in history and education, and worked at the Library of Congress. Johnson was also involved in John F. Kennedy's presidential campaign, and was even invited to Kennedy's inauguration. Despite his political aspirations, Johnson demonstrated a growing interest in communications, and joined the Howard Players upon arriving at Howard; he graduated with honors from the school in 1962.

That same year, though drawn to the New York theater world, Johnson was accepted to and enrolled in Howard University Law School with a full scholarship. While at law school, Johnson was published in the Howard Law Journal, and flourished under professors Herbert Reed and Patricia Harris. Shortly after taking the bar exam, Johnson was drafted during the Vietnam War; soon after, he married his girlfriend at the time, was sent to work as a clerk in New Jersey, and then shifted to work as a defense counsel largely for AWOL soldiers, for which he received an Army Commendation Medal.

After leaving the military, Johnson moved to Washington, D.C., where he worked as a copyright lawyer for three years; his work schedule allowed him to work in theatrical companies and study communications in his free time. Johnson also did some work in television for a show entitled Harambee and worked for Howard University's radio station. At the end of his tenure with the copyright office, Johnson worked with a justice from Sweden, who invited him to work as a law intern in Stockholm. After working in Stockholm, Johnson almost took a job working in France, but changed his mind to follow his dreams and move to Los Angeles in early 1971.

With the aid of the G.I. Bill, Johnson applied to and attended the Professional Theater Workshop in Santa Monica, California, where he took acting classes for nine months. Thanks to his law degree, Johnson found an entry-level position at Universal Studios working in the mail room; two days after his mailroom experience began, a new job opened up, and Johnson began his climb to the top of the ladder, becoming a production coordinator in late 1971.

In 1981, Johnson moved to Hawaii, where he married his second wife, who stayed in Los Angeles. Johnson’s career in Hollywood was accomplished and diverse; it included roles in such television programs as JAG and Navy: NCIS. Johnson also worked as a writer and producer in a wide variety of television programs, which included working as a prominent figure behind the notable television programs The Rockford Files and Magnum, P.I.