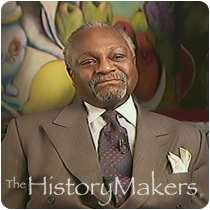 See how Charles F. Harris is related to other HistoryMakers

Pioneering book publishing executive Charles F. Harris was born on January 3, 1934 in Portsmouth, Virginia. During his elementary school days, Harris delivered newspapers in the community to make some extra money. His father insisted that he not deliver something that he did not read. Harris accepted his father’s challenge and became an avid reader at an early age. Graduating in 1955, from Virginia State University with a B.A. degree, he served in the Infantry of the United States Army and received an Honorable Discharge as a First Lieutenant.

Harris began his publishing career in 1956 at Doubleday & Company where, in 1965, as editor of Doubleday’s Publishing Division he launched the Zenith Book Series, which focused on African American history for elementary and high school students. He also acquired original manuscripts for publication and edited works by John Hope Franklin, Robert Weaver, Rayford Logan, and Jim Brown. Joining Random House in 1967 as senior editor, Harris edited Amistad, two volumes of writings on African American History and culture. This paperback magazine was launched in 1970 and was aimed at college humanities and social science courses. He also acquired The Greatest by Muhammad Ali with Richard Durham.

In 1999, Harris sold Amistad Press to HarperCollins Publishers, and he joined HarperCollins as Vice President Editorial Director of this new imprint and as an executive editor for the HarperCollins General Books Group. Harris also authored a monthly column on Bet.com. In 2003, Harris left HarperCollins Publishers to once again start his own publishing company, Alpha Zenith Media Inc., where he continued to publish works critical to the African American community.

See how Charles F. Harris is related to other HistoryMakers
Click Here To Explore The Archive Today!