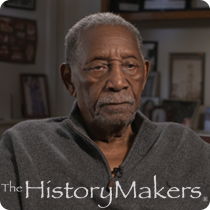 "Do Unto Others As You Would Have Them Do Unto You.$"

Civic activist and political leader Charles Evers was born on September 11, 1922 in Decatur, Mississippi to Jess Wright and James Evers. Evers received his B.S. degree from Alcorn Agricultural and Mechanical College in Lorman, Mississippi in 1950.

Evers enlisted in the United States Army and served overseas during World War II. After his return to the U.S., he began working as the first African American disc jockey at WHOC Radio station in Philadelphia, Mississippi in 1951. There, he worked for a family-run funeral home, operated a taxi service, a bootleg liquor business and operated the Evers Hotel and Lounge, which featured blues bands. Evers was active in the Mississippi branch of the NAACP and became the chapter’s state voter registration chairman in 1954. He also became involved with the Regional Council of Negro Leadership in 1952, and often spoke at its national conferences. In 1956, Evers moved to Chicago, Illinois, where he operated Club Mississippi, the Subway Lounge and the Palm Gardens nightclubs. After the assassination of his brother, Medgar Evers, he returned to Mississippi in 1963 and became the field director for the Mississippi branch of the NAACP. In 1969, Evers was elected as mayor of Fayette, Mississippi, the first African American to be elected to this position in the state of Mississippi during the post-Reconstruction era. Evers ran unsuccessfully for governor of Mississippi in 1971 and for United States Senate in 1978, each time as an independent candidate. He remained as mayor of Fayette until 1989. After losing the mayoral election in 1989, Evers became the store manager of WMPR 90.1FM in Jackson, Mississippi.

Evers has often been honored for his work in the Civil Rights Movement. In 1969, the NAACP named him Man of the Year. He was also selected as a Mississippi delegate for the Democratic National Convention in 1972. Evers, has also published two autobiographies, Evers, in 1971, and Have No Fear, in 1997. He has served as an informal advisor to President Lyndon B. Johnson, George C. Wallace, President Ronald Reagan, and Robert Kennedy.

Evers was interviewed by The HistoryMakers on May 24, 2017.