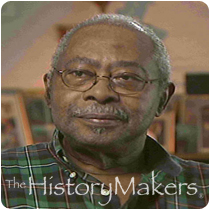 See how Charles E. Simmons is related to other HistoryMakers

Simmons attended elementary school in the Spanish Wells community but later would be in the last graduating class of the Penn Normal Industrial and Agricultural School on St. Helena Island. This school was begun in 1862 as an experimental program to educate Sea Island slaves freed at the beginning of the Civil War.

After graduation, Simmons was drafted into the United States Army where he served for two years. In 1952, Simmons entered South Carolina State University where he was president of the Commercial Club. He received his B.A. degree in business administration in 1956.

Simmons became the Director of the Beauford-Jasper County Equal Opportunity Commission and was the liaison between the land developers and the residents of St. John’s Island, South Carolina. While the corporation began to develop the upscale town of Kiawah, he worked to ensure employment opportunities for local residents. In 1976, Simmons went to work for Hargray Telephone Company as a technician. He then retired in 1993.

Simmons owned Simmons Properties. He was also on the Trustee Board of the Penn Center, a founding member of the Native Island Business and Community Affairs Association, Inc. (NIBCAA) and was the President of the Spanish Wells and Native Island Property Owners Association.

Simmons lived on Hilton Head Island with Rosa, his wife. They had four adult children, Charlesetta, Palmer, Greg and Benjamin.

Simmons was interviewed by The HistoryMakers on January 29, 2007.

See how Charles E. Simmons is related to other HistoryMakers
Click Here To Explore The Archive Today!