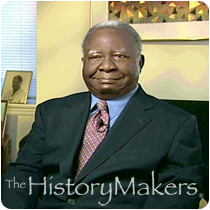 See how Charles D. Churchwell is related to other HistoryMakers

Library administrator and library science professor Charles Darrett Churchwell was born on November 7, 1926 in Dunnellon, Florida to Leeannah DeLaughter Churchwell and John Dozier Churchwell. After graduating from high school, Churchwell joined the United States Army, serving for two years in the U.S. and Philippine Islands. He obtained the rank of Sergeant 4th Grade while acting as his company's clerk. After returning from the armed forces in 1948, Churchwell attended Morehouse College and four years later, he received his B.S. degree in mathematics. Upon graduating, he became a reference assistant at the library of Alabama State College. In 1953, Churchwell graduated from Atlanta University with his M.L.S. degree with a focus on college and university library administration.

Churchwell became an instructor with Prairie View A&M College in Prairie View, Texas in 1954 where he met and married Yvonne Ransom. Two years later, he and Yvonne moved to New York City, New York so he could work as a reference librarian for the New York Public Library (NYPL). After only two years, Churchwell left New York for Illinois to study for his Ph.D. degree in library science at the University of Illinois at Urbana-Champaign, becoming a librarian with the school in 1964. After publishing his thesis, entitled Education for Librarianship in the United States: Some Factors which Influenced its Development between 1919 and 1939, Churchwell received his Ph.D. in 1966, the first African American male to earn a Ph.D. degree from the university. The next year, Churchwell became the associate director of the libraries at the University of Houston, becoming the first African American to work for the university during a time of intense segregation. Churchwell became heavily involved with the Black Student Union during this time, working as a liaison during a controversial campus visit by Black Panther Bobby Seale.

In 1970, Churchwell became a professor of library science and director of libraries for Miami University in Ohio, where he redesigned and renovated the library. He moved to Brown University in 1974, working as the university librarian while publishing his book Shaping of American Library Education with the American Library Association (ALA). In 1978, Churchwell began working for Washington University in St. Louis as dean of library services and created a unique endowment to fund the library’s technological services. After nearly a decade in St. Louis, Churchwell became a tenured professor with Wayne State University in Detroit, Michigan. He spent the 1990s as dean of the School of Library and Information Studies for Clark Atlanta University, before retiring in 1999.

Charles D. Churchwell was interviewed by The HistoryMakers on October 16, 2007.

See how Charles D. Churchwell is related to other HistoryMakers
Click Here To Explore The Archive Today!