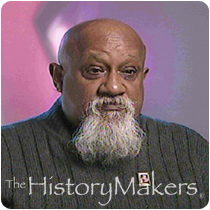 Boston, Massachusetts, civil rights activist Charles “Chuck” Turner was born in Cincinnati, Ohio, in 1941. Turner was raised by his aunt, Mamie K. Faulkner, and his grandmother, Laura Troy Knight; his grandfather, Doctor Charles Henry Turner, was a pioneering animal behavior biologist, while his father, Darwin Turner, was a pharmacist.

Turner graduated from Harvard University in 1963 with his B.A. degree in government; he then spent a year in Washington, DC, reporting for The Afro-American Newspaper. Turner then moved north, first to New York, then to Hartford, where he joined the influential civil rights group the Northern Student Movement.

In 1966 Turner returned to the Boston area, joining the South End Neighborhood Action Program (SNAP) where he worked to help the community and assisted families who were losing their homes to gentrification. Turner formed a community action group which pressured the local government to provide trash clean-up in black neighborhoods and led demonstrations which highlighted how inadequately city inspectors enforced building codes in public housing.

A former leader of the United Community Construction Workers and one-time chair of the Boston Jobs Coalition, Turner spent several years crusading against job discrimination in the city. Turner campaigned for increased hiring of blacks on city construction jobs; in 1991, unsatisfied with the mayor’s enforcement of fair employment practices, he led a four hour sit-in at the mayor’s office, which resulted in a number of key concessions being made.

Turner also used his activism strategies and leadership skills to spearhead other community efforts; he played a leading role in a successful campaign to prevent the city from building a highway through predominantly black neighborhoods. Turner also chaired the Southwest Corridor Land Development Corporation.

Referred to as one of the best-known agitators in the city, Turner was elected to the Boston City Council in 1999, a position he held for over ten years. As a city council member, Turner continued his defense of civil and human rights; he authored an ordinance protecting transgendered people from discrimination. Turner successfully led an effort to protect the affirmative action guidelines of Massachusetts when Governor Mitt Romney sought to change them. As chairman of the Education Committee, Turner rallied against educational inequality in the Boston public schools.

See how Charles "Chuck" Turner is related to other HistoryMakers
Donate Now
Click Here To Explore The Archive Today!