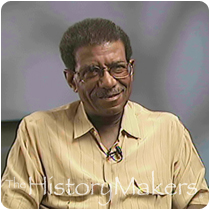 See how Charles "Chuck" Smith is related to other HistoryMakers

Theatrical director Chuck Smith was born Charles Norman Smith on March 7, 1938 in Chicago, Illinois to Charles P. and Amanda Smith. Smith attended Kozminski Elementary School and at age twelve, saw his aunt in a production of The Monkey’s Paw staged by the black Skyloft Players. Smith graduated from Parker High School in 1956 and enlisted in the United States Marine Corps. After his service in the Marines, Smith took a job with the United States Post Office, and in 1963, he won a role in the Dramatic Arts Guild’s production of McAdam and Eve. In 1970, he landed his first paying role in the Goodman Theatre’s production of The Night Thoreau Spent in Jail. Smith studied theatre at Loop College, then Governor’s State University, while working as a computer programmer for the Illinois Department of Public Aid. He earned his B.A. degree in theatre in 1984.

Influenced by veteran Chicago playwright Ted Ward, Smith became involved with the Experimental Black Actors Guild or X-BAG, Kuumba Theatre, eta Creative Arts Foundation and other independent black theatres in the 1960s. In 1982, he was awarded the Paul Robeson Award by the Black Theatre Alliance of Chicago. Smith began teaching at Columbia College in 1983, and in 1984, he co-founded the Chicago Theatre Company with Douglas Alan Mann as an Actors Equity company. In 1991, Smith received a grant from Arts Midwest to study larger venues and touring, and since 1992, he has been a Goodman Theatre Artistic Associate. Smith’s directorial credits include The Gift Horse, The Amen Corner, A Raisin in the Sun, Blues for an Alabama Sky, Ma Rainey’s Black Bottom and A Christmas Carol for the Goodman Theatre. He has also directed Master Harold and the Boys, Home, and Dame Lorraine for Victory Gardens Theatre. Smith directed Playboy of the West Indies for Congo Square Theatre, The Temple for eta and The Last Season for Robey Theatre. After directing The Meeting, Smith with actors Harry Lennix and Gregory Alan-Williams formed the touring company, Legacy Productions.

Smith won a Chicago Emmy Award for NBC’s Crime of Innocence. He also won an Emmy for his theatrical direction of Fast Break to Glory. In 1997, he received the Award of Merit from the Black Theatre Alliance. Smith, a long time board member of the African American Arts Alliance, spends time offering career advice and workshops to aspiring actors and directors.

Smith lives on Chicago’s South Side and has one daughter, Michele.

See how Charles "Chuck" Smith is related to other HistoryMakers
Click Here To Explore The Archive Today!