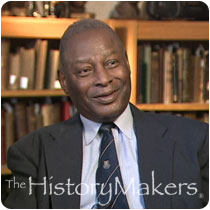 See how Charles Blockson is related to other HistoryMakers

Black studies scholar and author Charles L. Blockson was born on December 16, 1933 in Norristown, Pennsylvania. A book lover as a young boy, the son of Annie Parker and Charles E. Blockson, has amassed one of the world's largest private collections of African American history.

Blockson graduated from Penn State University in 1956, where he played fullback on a football team that included football greats Lenny Moore and Roosevelt Grier. He turned down an offer to play professional football for the New York Giants. Blockson was a member of the U. S. Army from 1957-1958. A natural historian, Blockson taught local and multicultural history while serving as a human relations advisor for the Norristown Area School District. He held seminars and workshops for teachers and other school district employees. Blockson traveled extensively around the world, acquiring rare African, African American and African Caribbean publications dating back to the sixteenth century in addition to other materials. In 1984, Blockson donated these amazing items to Temple University, where he serves as curator of the Charles L. Blockson Afro-American Collection. It includes prints, photographs, slave narratives, manuscripts, letters and sheet music as well as other objects. For example, within the Collection are first edition works by Phyllis Wheatley and W.E.B. DuBois; African Bibles; correspondence of Haitian Revolutionaries; Paul Robeson's sheet music; narratives by Sojourner Truth and Frederick Douglass; thousands of taped interviews and radio programs on African and African American history and culture; and over 500,000 photographs.

Blockson lectures internationally and organizes exhibitions and black studies programs throughout the country. He has served as director of the Pennsylvania Black History Committee, director of the Pennsylvania Afro-American History Board and governor's commissioner of the Governor's Heritage Program. Blockson has been a member of the Historical Society of Pennsylvania, the NAACP, the Pennsylvania State University Alumni Council, the Urban League and the American Antiquarian Society. For his football exploits, the Pennsylvania State Quarterback Club honored him in 1984. Blockson is the recipient of a Lifetime Achievement Award from the Before Columbus Foundation and multiple honorary doctorates. He is considered one of the country's leading experts on the Underground Railroad.

See how Charles Blockson is related to other HistoryMakers
Click Here To Explore The Archive Today! 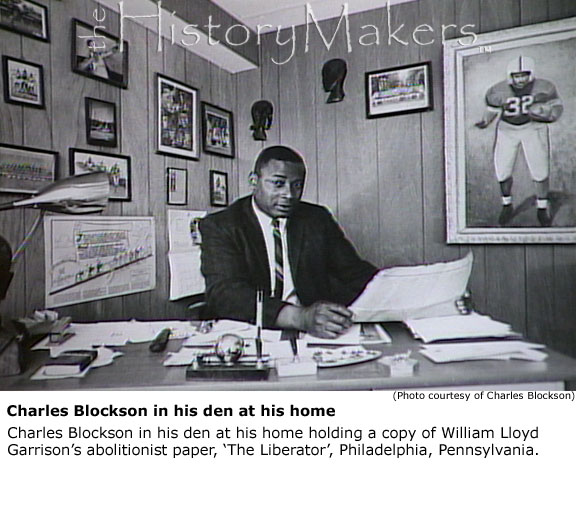