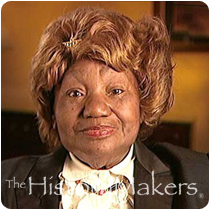 See how Charlene Jordan is related to other HistoryMakers
Donate Now

Charlene Jordan, proprietor of Charlene's House of Beauty, operates one of the oldest African American-owned businesses in Denver, Colorado's Five Points district. She was born on July 2, 1924 in the country near Nashville, Arkansas. Life was hard for young Charlene and her family. Her father, Miles Jordan, lost the family land to unscrupulous white officials while her mother, Curlie Hill Jordan, struggled to make ends meet. Jordan had to work long hours in hot cotton fields for ten cents an hour. Her nephew was attacked by a mob and disappeared within earshot of her house.

After graduating from high school in 1943, Jordan joined Roosevelt's National Youth Administration and left Arkansas. Recruited to work for Boeing Aircraft Company in Seattle, Washington with other youth, Jordan also served as a "tank scaler" in Vancouver, British Columbia. She returned to Arkansas in 1948 and attended the Velvatex College of Cosmetology in Little Rock. She then moved to Denver, Colorado. Jordan took a refresher course at Duncan Beauty School, enhancing her hot comb pressing technique before opening her own "House of Beauty." She joined the Colorado Hair Dressers and Cosmetologists Association and the Success Club of America, becoming a member of the Incomparable 75. Later she purchased storefronts on Welton Street, now better known as "Jordan's Corner."

Denver's rich and poor alike have sought Jordan's services, including some of the top entertainers and celebrities that appeared at the Rassonian Hotel and other historic Five Point venues. Over the years, Charlene Jordan has become a pillar and anchor of Five Points. Of her many accomplishments, she is most proud of her daughter.

See how Charlene Jordan is related to other HistoryMakers
Donate Now
Click Here To Explore The Archive Today!