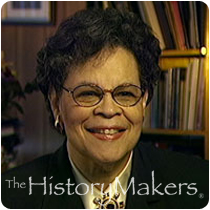 See how Charlene Drew Jarvis is related to other HistoryMakers

Charlene Drew Jarvis was born in Washington, D.C., on July 31, 1941. The second of four children, her mother was an economist and her father, Dr. Charles Drew, was the noted blood bank pioneer. After graduating from Roosevelt High School in 1958, Jarvis earned her B.A. from Oberlin College in 1962. She went on to Howard University to earn her M.S. in 1964, and in 1971 she earned her Ph.D. from the University of Maryland.

Jarvis began her career in 1965 as a pre-doctoral fellow at the National Institute of Mental Health, and after earning her Ph.D. she remained there as a research scientist until 1978. The following year, Jarvis was elected to the City Council of the District of Columbia, where she served for twenty-one years. While there, she chaired the Committee on Economic Development during a citywide financial crisis. She introduced legislation that brought in the new Convention Center and the MCI Center, current home of the Washington Wizards and Washington Capitals. In 1996, Jarvis was named president of Southeastern University in Washington, D.C., the first woman to hold the position. She gave up her seat on the City Council in 2000 to devote her energies solely to the university. Under her leadership, Southeastern has strengthened its curriculum and partnered with a number of local organizations, such as the Greater Washington Society of Certified Public Accountants, to support professional development of the students.

Active in both education and the community, Jarvis has received numerous honors. She is the recipient of the 2002 Brotherhood-Sisterhood Award from the National Conference of Community and Justice, the Ibero Chamber of Commerce Community Service Award, and numerous honorary degrees. Jarvis serves on the Executive Committee of the Federal City Council and is a past chairperson of the District of Columbia Chamber of Commerce. She is also active with the American Association of University Women and serves on the board of the National Association of Independent Colleges and Universities. Jarvis has also been listed in numerous editions of Who's Who, including Who's Who in the World and Who's Who Among African Americans. She has two sons and two grandsons.

See how Charlene Drew Jarvis is related to other HistoryMakers
Click Here To Explore The Archive Today!