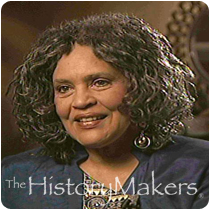 See how Charlayne Hunter-Gault is related to other HistoryMakers

Award-winning journalist, author, and school desegregation pioneer Charlayne Hunter-Gault was born on February 27, 1942, in Due West, South Carolina, to Charles and Althea Hunter. Because her father, a chaplain in the United States Army, was often re-assigned, Hunter-Gault and her siblings attended schools in California, Indiana, Ohio, Georgia and Alaska. Hunter-Gault graduated third in her class from Atlanta’s Henry McNeal Turner High School in 1960. Backed by a group of black businessmen and accompanied by fellow student Hamilton Holmes, Hunter-Gault applied for admission to the segregated University of Georgia. Initially denied admittance, she enrolled at Wayne State University in Detroit, but Constance Baker Motley of the NAACP Legal Defense Fund and a group of Atlanta lawyers won her admittance to the University of Georgia in January of 1961. Hunter-Gault transcended the expected racial hostility, served a summer internship with the Louisville Times and graduated with her B.A. degree in journalism in 1963.

That same year, Hunter-Gault accepted a job as an editorial assistant with the New Yorker magazine. She won a Russell Sage Fellowship for a year and then served as a reporter and evening anchor for WRC-TV in Washington, D.C. She returned to print journalism by accepting a post with the New York Times in 1968, establishing the newspaper’s Harlem bureau. In 1978, Hunter-Gault joined PBS’s McNeil-Lehrer Newshour where she served as national correspondent and filled in as an anchor. She joined NPR in 1997 as chief correspondent in Africa. In 1999, Hunter-Gault became the Johannesburg, South Africa bureau chief for CNN.

Hunter-Gault has received numerous awards for journalism including two National News and Documentary Emmy Awards and two George Foster Peabody Awards. She has been recognized by the National Urban Coalition and the American Women in Radio and Television. Named Journalist of the Year by the National Association of Black Journalists, Hunter-Gault has written articles for Essence, Ms., Life, and Saturday Review. Her courage as a pioneer integrationist has been chronicled by Calvin Trillen and recognized by the University of Georgia, where a hall is named for her and fellow student Hamilton Holmes. Her autobiography, In My Place, was published in 1992. Hunter-Gault’s exploration of modern Africa, entitled New News out of Africa: Uncovering Africa’s Renaissance, was published in 2006.

Hunter-Gault is the mother of a grown son and daughter and currently lives in South Africa with her husband, banker Ron Gault.

See how Charlayne Hunter-Gault is related to other HistoryMakers
Click Here To Explore The Archive Today!