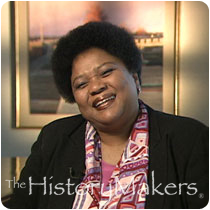 See how Charisse R. Lillie is related to other HistoryMakers

Born to educators Richard and Vernelle Lillie on April 7, 1952, Charisse Lillie was made aware of the importance of service and education, and has made both part of her own legal legacy. Lillie received her B.A. from Wesleyan University in 1973, her J.D. from Temple University Law School in 1976, and her LL.M. from Yale University in 1982. Throughout her distinguished career, Lillie has shown a profound commitment to affecting change through the law. Among the first generation of students to integrate Houston's public schools in the 1960s, she was aware that attorneys were critical to dismantling the laws of segregation.

As a college student, Lillie wrote a monograph on the careers of African American federal judges. This experience helped shape her career by putting her in contact with early giants. After receiving her LL.M., Lillie taught law at Villanova University in Pennsylvania before embarking on a distinguished career in government service as assistant U.S. attorney for the Eastern District of Pennsylvania (Civil Division) from 1985 to 1988, general counsel to the Redevelopment Authority of Philadelphia from 1988 to 1990, and as city solicitor for Philadelphia from 1990 to 1992. She joined Ballard Spahr Andrews & Ingersoll in 1992.

Serving as partner and chair of the litigation department of Ballard Spahr Andrews & Ingersoll, Lillie's practice centers on discrimination defense. She lectures widely and serves as an adviser on issues such as diversity, anti-discrimination and affirmative action. Lillie serves on countless boards, committees and organizations and was most recently appointed chairperson of the board of the Federal Reserve Bank. She is the recipient of numerous awards, including the Whitney M. Young, Jr. Award from the Urban League of Philadelphia. Lillie is married to Thomas McGill, Jr. and has one daughter, Alison McGill.

See how Charisse R. Lillie is related to other HistoryMakers
Click Here To Explore The Archive Today!