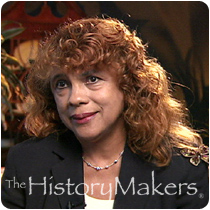 See how Chaplain Sylvia Tucker is related to other HistoryMakers

Sylvia Voncill Tucker was born on June 20, 1945 in Melbourne, Florida. Her father was a presser and her mother worked as a domestic. Her parents separated at an early age and she and her siblings were raised by their father in Melbourne. She was very sickly as a child and suffered from severe asthmatic attacks. As a young girl she had dreams of becoming a nurse. She graduated from Stone High School in 1963, where she was active in the homemakers club and the social action club.

After graduation she married and was a homemaker from 1963 until 1978. Her husband was a member of the United States Air Force, and they traveled the world, living in Greece, Japan and several U.S. cities. In 1978, she entered the workforce, becoming a financial advisor at First Merchants Bank in Richmond, Virginia. She continued her financial counseling work at John Randolph Medical Center in Hopewell, Virginia from 1983 until 1995. In 1979, she also became active with the Southern Christian Leadership Conference in Virginia and created the Miss SCLC Pageant for young female members of the organization. In 1982, after raising her four children, she went back to college and earned her degree in theology at the University of Lynchburg Seminary. In 1994, she was ordained and licensed as a Baptist minister.

In 1985, while still working in the finance department at John Randolph Medical Center she was given the opportunity to pursue her ministry full time, when she was appointed Chaplain of the hospital thus making history as she was the first female African American hospital chaplain in the state of Virginia.

Tucker continued to add to her list of firsts, in 2000 she was appointed the SCLC National Chaplain, and was the first woman to hold the post. As a hospital chaplain she has dedicated newborn babies, married ill couples, and comforted countless families and sick patients.

Tucker resides in Disputanta, Virginia with her husband, Raymond and they have four grown children and four grandchildren.

See how Chaplain Sylvia Tucker is related to other HistoryMakers
Click Here To Explore The Archive Today!