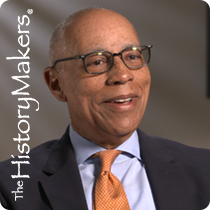 See how Channing Johnson is related to other HistoryMakers

Lawyer Channing Johnson was born on February 21, 1951 in Pasadena, California to Alvin and Jeffalyn Johnson. His mother was a college professor who taught African American history, turned management consultant. Her sister, Betye Saar, is a well-known African American artist. Johnson graduated from John Muir High School in Pasadena in 1969. He went on to earn his B.A. degree in economics from Stanford University in 1972, and his J.D. degree from Harvard Law School in 1975.

Channing began his legal career as a corporate associate at the law firm of Tuttle & Taylor in Los Angeles, California. In 1978, Los Angeles City Councilman Robert C. Farrell hired Johnson as his chief deputy where he worked until being appointed as president of the Economic Resources Corporation in Lynwood, California. In 1986, Johnson was hired by Kaye Scholer Fierman Hays & Handler in Los Angeles and later became partner, where his clients included groups like the R&B group TLC. He co-founded the Los Angeles office of Akin Gump Strauss Hauer & Feld LLP in 1997, where he represented entertainment companies and Stevie Wonder, GospoCentric Records, and SFX Entertainment. Johnson negotiated the $30 million acquisition of The Great Western Forum Arena for Bishop Kenneth Ulmer of the Faithful Central Bible Church, leading Johnson to expand his clientele to mega church leaders and their companies, including Bishop T.D. Jake’s TDJ Enterprises. When he joined Loeb and Loeb LLP as a partner in the entertainment and corporate practice groups, Johnson expanded his practice to include independent film companies. Johnson also served as counsel for KCET Television on their merger agreement with Link Media in 2012.

Johnson has served on the board of directors and as chair of KCET Television. He was taught as an adjunct professor of entertainment law at Whittier Law School in Costa Mesa, California. Johnson has been named one of the Top Black Lawyers in the country by Black Enterprise magazine in 2003, and as a Southern California Super Lawyers by Thomson Reuters for the past ten years since 2000.

Channing Johnson was interviewed by The HistoryMakers on November 18, 2016.

See how Channing Johnson is related to other HistoryMakers