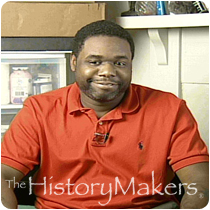 See how Cedric Smith is related to other HistoryMakers
Donate Now

Artist Cedric Lamar Smith was born on May 17, 1970 in Philadelphia, Pennsylvania. As a young boy, he moved with his mother, Geraldine Smith, to Thomaston Georgia. Smith attended Southwest DeKalb High School in Decatur, Georgia.

After school, he began working as a barber. Smith did not consider art as a career until one of his clients, who was a self-taught artist, invited Smith to his art studio. Smith was inspired by his client’s work. As a self-taught artist, Smith creates a personal genre of work. He draws on a wide range of influences and sources, both traditional and contemporary, including landscape art, pop art, brand advertising, and photography. Much of Smith’s current work is devoted to redressing the absence of African Americans in advertising and on the labels of popular brands.

Smith was interviewed by The HistoryMakers on January 23, 2007.

See how Cedric Smith is related to other HistoryMakers
Donate Now
Click Here To Explore The Archive Today!