Information about Cedric The Entertainer 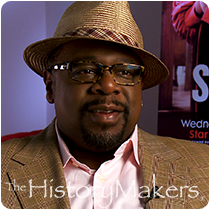 See how Cedric The Entertainer is related to other HistoryMakers

Actor and comedian Cedric “The Entertainer” Kyles was born on April 24, 1964 in Jefferson City, Missouri to Kittrell Kyles and Rosetta Boyce Kyles. After junior high school, Kyles and his family moved to Berkeley, Missouri, where he graduated from Berkeley High School in 1982. Kyles received his B.A. degree in mass communication from Southeast Missouri State University in 1987, and was hired at State Farm Insurance. He began performing stand-up comedy around the same time, and was a winner of the Miller Lite Comedy Search in 1990.

Kyles first appeared on television in 1992, on the variety show, It’s Showtime at the Apollo. The following year, he served as host of BET’s ComicView, and in 1995, he hosted HBO’s Def Comedy Jam. Kyles started the Cedric the Entertainer Charitable Foundation, Inc. in 1995 with his sister in St. Louis, Missouri. He got his big break on television as Cedric “Jackie” Robinson, a supporting role on The Steve Harvey Show, in 1996. Kyles then toured for two years with his co-star Steve Harvey, and comedians Bernie Mac and D.L. Hughley on the highest selling and most popular comedy tour of all time, The Kings of Comedy tour. The tour was filmed by Spike Lee and later made into a film, The Original Kings of Comedy, which grossed $40 million, and catapulted the careers of Kyles and his tour mates.

Kyles made his film debut in 1998 in the movie Ride. He went on to appear in over thirty films, including Big Momma’s House, Ice Age, the Barbershop franchise, the Madagascar franchise, Johnson Family Vacation, The Honeymooners, Code Name: The Cleaner, and the Planes franchise. Kyles also narrated the animated series The Proud Family, starting in 2001. In 2002, he co-founded his own production company, A Bird and A Bear Entertainment. He made his directorial debut in 2010 with the film, Dance Fu. Kyles also hosted the game shows It’s Worth What? and Who Wants to be a Millionaire, and received the lead role in a new sitcom in 2012, The Soul Man.

Kyles was recognized by BET in 1994 for his work as host of ComicView with the Richard Pryor Comic of the Year Award. He received four NAACP Image Awards for Outstanding Supporting Actor in a Comedy for his work on The Steve Harvey Show, and another for his voice-acting in The Proud Family. Comedy Central placed Kyles on its “100 Greatest Stand-Ups of All Time” in 2004, and he was selected as lead comedian for the White House Correspondents’ Dinner in 2005. He was inducted into the St. Louis Walk of Fame in 2008.

Cedric “The Entertainer” Kyles was interviewed by The HistoryMakers on July 31, 2014.

See how Cedric The Entertainer is related to other HistoryMakers
Click Here To Explore The Archive Today!