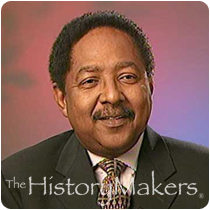 See how Cecil Hale is related to other HistoryMakers
Donate Now

Born on August 3, 1945, in St. Louis, Missouri, Cecil Hale has distinguished himself in the world of communications. After graduating from Southern Illinois University in 1966, he began his career in radio by working as an announcer and assistant general manager at WMPP in Chicago Heights, Illinois. Beginning in 1970, Hale worked at WVON in Chicago as an announcer, assistant program director, and assistant music director. He also recorded a show for national and international syndication. From 1973 to 1975, Hale expanded opportunities for minorities in the radio business as the president for the National Association of Television and Radio Artists. In 1975, he earned an M.A. in communication from The International University of Communications.

In 1977, Hale left WVON for Phonogram/Mercury Records Polygram. There, he promoted rhythm and blues for a year while he completed work on his Ph.D. in philosophy from the Union Institute. In 1979, he accepted a job as vice president at Capitol Records/E.M.I. but left in 1981 to found Hale Media Communications Consultancy. In his capacity as a consultant, he advised the Federal Republic of Nigeria about network television.

Always looking for new, rewarding opportunities, Hale began teaching broadcasting at the City College of San Francisco in 1984 and was awarded tenure. He also taught summer classes at Stanford University and was granted a fellowship at the University of California, Berkeley. He spent eight years as General Manager for KCSF, a college radio station with a city-wide audience. Hale went back to being a student himself and completed a M.P.A. at Harvard University in 1995.

Hale's activities extend to a wide variety of civic organizations, including the American Bar Association, the Society for Values in Higher Education and the NAACP.

See how Cecil Hale is related to other HistoryMakers
Donate Now
Click Here To Explore The Archive Today!