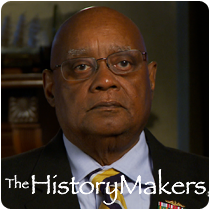 See how Cdr. William Bundy is related to other HistoryMakers
Donate Now

U.S. Navy Commander and Professor William F. Bundy was born on August 12, 1946 in Baltimore, Maryland to William C. Bundy and Paulyne L. Bundy. Bundy attended Henry Highland Garnet School and then Booker T. Washington Junior High School before graduating from Baltimore City College High School in 1964, after which he enlisted in the Navy. He then graduated from the University of Hawaii with his B.A. degree in liberal studies and technical journalism in 1973.

In 1964, Bundy reported to the U.S. Navy Receiving Station in Washington D.C., and then was assigned to Sonar Technician A and A1 School in Key West, Florida. Bundy was assigned overseas duty in USNS BOWDITCH where he served until 1966. He then completed submarine Cold War patrols in nuclear attack submarines on the USS STURGEON, USS RICHARD B RUSSELL and as a combat systems officer on the USS MEMPHIS. Bundy also completed Strategic Deterrent Patrols on the USS SAM HOUSTON GOLD as the assistant weapons officer, and as the navigator and operations officer on the USS LAFAYETTE BLUE. Bundy served ashore as a sonar instructor at the Naval Submarine Training Center at Pearl Harbor, and then went on to complete Officer Candidate School. In 1981, he was assigned to the Nuclear Operations Division at the U.S. Atlantic Command where he participated in directing and developing fleet ballistic missile operations.

In 1988, Bundy assumed command of USS BARBEL in Sasebo, Japan and conducted exercises in the Western Pacific as part of the Seventh Fleet and Submarine Group Seven. Bundy was assigned as Chief Staff Officer of Submarine Squadron Three in 1990. He also served as Director of the Naval Officer Candidate School in 1993. That same year, Bundy graduated from the U.S. Naval War College with his M.A. degree in national security and strategic studies. Bundy retired from active duty in 1994. Bundy was then appointed as Director of the Rhode Island State Department of Transportation and as a FleetBoston Financial vice president before returning to the U.S. Naval War College as an associate professor. In 2005, he earned his Ph.D. degree from Salve Regina University and was promoted to full professor at the U.S. Naval War College. He was also appointed as Director of the Vice Admiral Samuel L. Gravely, Jr. Naval Research Group.

Bundy’s military decorations include the Meritorious Service Medal, the Navy Meritorious Service Medal with a Gold Star, the Navy Commendation Medal with a Silver Star, and the Navy Achievement Medal with two Gold Stars. He is one of the Centennial Seven African American submarine skippers who served during the first one-hundred years of the Submarine Service. Bundy was recognized as the Black Engineer of the Year for Achievement in Government by U.S. Black Engineer and Information Technology magazine in 1993. In 1994, he received the U.S. Navy League Dalton L. Baugh Award for Inspirational Leadership, and, in 2010, Bundy was awarded the Navy Superior Civilian Service Award.

William F. Bundy was interviewed by The HistoryMakers on April 27, 2013.

See how Cdr. William Bundy is related to other HistoryMakers
Donate Now
Click Here To Explore The Archive Today!