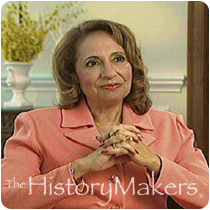 Favorite Color:
Earth Tones
Favorite Food:
All Food
Favorite Time of Year:
All Seasons
Favorite Vacation Spot:
Home
Favorite Quote:
It Is Not Enough For You To Do Your Very Best. You Must Do What Is Required Of The Situation.

Favorite Color:
Earth Tones
Favorite Food:
All Food
Favorite Time of Year:
All Seasons
Favorite Vacation Spot:
Home
Favorite Quote:
It Is Not Enough For You To Do Your Very Best. You Must Do What Is Required Of The Situation.

See how Cathy Hughes is related to other HistoryMakers

Radio maven Cathy Hughes was born in Omaha, Nebraska in 1947. Beginning her career in radio in 1969, Hughes’ first position was with KOWH, a black radio station in Omaha. Her successes there prompted the Howard University School of Communications to offer her a position as a lecturer and as Assistant to the Dean of Communications.

In 1973, Hughes was named general sales manager to WHUR-FM in Washington, D.C, and by 1975 was hired as the general manager of the station. Under her guidance, WHUR-FM, which had been struggling along with $300,000 in annual sales revenues, increased its annual revenues to more than $3.5 million. In 1978, Hughes left WHUR for WYCB Radio, where she served as the vice president and general manager of the station.

Hughes and her husband at the time, Dewey Hughes, decided they wanted to buy their own radio station in 1979, and after being rejected by thirty-two banks, they found a lender. With their loan, they purchased WOL, a small Washington, D.C. station and Radio One was born. While Hughes wanted a talk format for the station, the bank was pressing for music. A compromise was reached permitting Hughes to have a morning talk show program that was followed by music programming throughout the day.

Hughes’ marriage ended shortly after purchasing the station and she began her path as a single mother. She purchased her husband’s share in the station, but hard times soon forced she and her son, Alfred, to give up their apartment and move into the station to make ends meet. Over time, however, the station began turning a profit, largely due to the success of her talk show.

Since the early days of being a station owner, Hughes’ rise has been remarkable. Today, Radio One owns 65 radio stations throughout every major market in the country, making the company the largest black-owned radio chain in the nation. In January of 2004, Hughes launched TV One, a cable television channel targeted at the African American community.

Today, Hughes has the distinction of being the first African American woman to head a media company publicly traded on the U.S. Stock Exchange, and she continues to serve as Chairperson of Radio One.

See how Cathy Hughes is related to other HistoryMakers
Click Here To Explore The Archive Today!