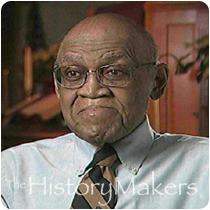 See how Carter Bowman is related to other HistoryMakers
Donate Now

Church historian and graphic arts teacher Carter Bowman, Jr. was born on February 28, 1922 in Washington, D.C. to Eudora McDaniel and Carter Bowman, Sr. His mother was a homemaker while his father was a sanitation worker in Washington, D.C. Bowman was raised in the Georgetown area where his family attended Mt. Zion United Methodist Church, one of the oldest African American churches in Washington, D.C. In 1939, Bowman earned his high school diploma in printing from Armstrong Technical School where he was a member of the Reserved Officers' Training Corps (ROTC). He also played on the basketball and football teams. Bowman earned his B.S. degree in graphics arts from Tuskegee Institute in Alabama in 1944 and his M.Ed. from the University of Pittsburgh in Pennsylvania in 1974.

During World War II, he worked as a clerk for the U.S. Department of Commerce in Washington, D.C. In 1946, Bowman began his teaching career in printing at Brown Junior High School in Washington, D.C. Between 1948 and 1952, he took a brief hiatus from teaching and worked for Metro Printing, an African American-owned publishing company. Metro struggled to make a profit because they could not attract major clients due to the exclusion of African Americans from the printers' union. As a result, in 1952, Bowman returned to the Washington, D.C. public school system where he taught printing and graphic arts until retiring in 1982.

After his retirement, Bowman became the historian and archivist for Mt. Zion United Methodist Church, which was on the National Register of Historical Places, and helped the church receive several grants to preserve their records, which date to the 1830s. Bowman was an active member of numerous civic and historical organizations, including the Washington-Tuskegee Alumni Club, the Montgomery County Historical Society, and the Washington, D.C. Genealogical Society.

See how Carter Bowman is related to other HistoryMakers
Donate Now
Click Here To Explore The Archive Today!