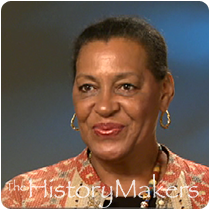 Visual artist Carrie Mae Weems was born on April 20, 1953 in Portland, Oregon to Myrlie and Carrie Weems. Weems graduated from the California Institute of the Arts, Valencia with her B.F.A. degree in 1981, and received her M.F.A. degree in photography from the University of California, San Diego in 1984. From 1984 to 1987, she participated in the graduate program in folklore at the University of California, Berkeley.

Weems is represented by the Jack Shainman Gallery in New York City, and has exhibited her art at the Rhona Hoffman Gallery in Chicago, Illinois, and Gallery Paule Anglim in San Francisco, California. She has participated in numerous solo and group exhibitions at major national and international museums, including the Museum of Contemporary Art (Los Angeles), Solomon R. Guggenheim Museum, Corcoran Gallery of Art, The Frist Center for the Visual Arts, the Metropolitan Museum of Art, Tate Liverpool in England, and the Bilbao Fine Arts Museum in Spain. She is represented in public and private collections around the world, including the Metropolitan Museum of Art, the Whitney Museum of American Art, the Museum of Modern Art (New York), The Museum of Fine Arts (Houston), The Art Institute of Chicago, and the Portland Art Museum. In addition, Weems has taught as an assistant professor or visiting professor at Hampshire College, Hunter College, California College of Arts and Crafts, Williams College, Harvard University, Syracuse University, and the University of Pennsylvania.

Weems has received numerous awards, grants and fellowships including the Joseph H. Hazen Rome Prize Fellowship; a National Endowment for the Arts Fellowship; a Smithsonian Fellowship; the Alpert Award for Visual Arts; the Louis Comfort Tiffany Award; and the Anonymous Was a Woman Foundation Award. In 2012, she was presented with one of the first U.S. Department of State’s Medals of Arts in recognition for her commitment to the State Department’s Art in Embassies program. In 2013, Weems received the MacArthur Foundation’s “Genius” Grant, the Gordon Parks Foundation Award and the Congressional Black Caucus Foundation’s Lifetime Achievement Award.

Carrie Mae Weems was interviewed by The HistoryMakers on September 10, 2014.

See how Carrie Mae Weems is related to other HistoryMakers
Donate Now
Click Here To Explore The Archive Today!