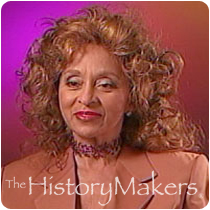 See how Carrie L. Davis is related to other HistoryMakers
Donate Now

Carrie Lapsky Davis, an educator, clothing boutique owner and realtor, has been a community activist and worker in the political process since her days as a college girl participating in the Civil Rights Movement.

Born May 24, 1944 in Chicago, Davis' father was a physician and surgeon. However, Davis was raised in Port Gibson, Mississippi by her grandparents who owned a dairy. Davis graduated from Tougaloo College in Tougaloo, Mississippi in 1964, the same year she married fellow Tougaloo graduate, James W. Davis, a CPA.

Coming to Chicago in 1968, Davis became a teacher. In 1973, she earned a master's degree in Education from Northwestern University. Opting for the business world, Davis opened Cari's Designer Fashions in 1988, which enabled her to travel the world in search of unique women's clothes. Closing the business ten years later, Davis worked as a Headstart administrator for the Chicago public school system.

Davis is a lifetime member of the NAACP and a member of Operation Push. She was a founder of the Lake Shore Links, a member of the Chicago Society of Mannequins and the Chicago Art Institute, Tougaloo College Alumni and Alpha Kappa Alpha Sorority. In 1999, she was elected to the Tougaloo Hall of Fame.

The Davises are residents of Chicago's Hyde Park. They have two sons: Stephen, a lawyer and investment banker, and Christopher, a Wall Street trader.

See how Carrie L. Davis is related to other HistoryMakers
Donate Now
Click Here To Explore The Archive Today!