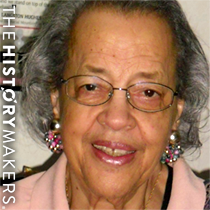 "I Am Only One, But Still I Am One. I Cannot Do Everything, But Still I Can Do Something, So I Will Not Refuse To Do What I Can Do."

Magazine editor Carolyne S. Blount was born on March 21, 1943 in Richmond, Virginia to Callie Brown Scott and Earl Scott, Sr. Blount graduated from Ruthville High School in Ruthville, Virginia, and received her B.S. degree in education, library science, and history from Virginia State University in 1963. She then earned her M.A. degree in library science from Drexel University in 1964.

From 1964 to 1967, Blount worked as an assistant librarian at Morgan State University in Baltimore, Maryland. In 1967, she accepted the position of technical reports specialist in the federal systems division at IBM in Owego, New York. From 1969 to 1971, Blount worked as a reference librarian in IBM’s systems development division in Endicott, New York. Once Blount and her husband, James M. Blount, assumed ownership of About…Time Magazine, Inc. in 1972, she became the executive editor. Under her leadership, About…Time researched and published a six-part history series called “Rochester Roots/Routes” in 1984.

About…Time published other notable articles such as “Last Mile of a 400-Year Journey,” which examined the spirituality of African burial grounds, and “Katrina Echoes: Storm Season Aftermath is Hard to Erase.” In addition to her publishing, Blount was involved with the Southern Black Heritage Collection’s research on black elementary and high school histories in Charles City County, Virginia.

Blount serves on the board of directors of the national Gateways Music Festival, celebrating classical musicians of African descent, and is a member of the Rochester Association of Black Journalists and Delta Nu Omega Chapter of Alpha Kappa Alpha Sorority, Inc. Blount received a number of awards over her career including the Howard Coles Communications Award in 1983 and 1985, the Media Achievement Award from Virginia State University National Alumni Association, Women’s History Month Award from the Rochester Board of Education, as well as a Global Ministries Humanitarian Award for international reporting, presented at the United Nations by the National Association of Negro Business and Professional Women's International Division.

Carolyne S. Blount was interviewed by The HistoryMakers on April 20, 2018.