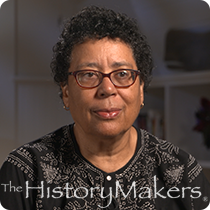 See how Carolyn Wilkins is related to other HistoryMakers

Professor and jazz musician Carolyn Wilkins was born on April 23, 1952 in Chicago, Illinois to Elizabeth Sweeny and Julian Wilkins. She graduated from the University of Chicago Laboratory School in Chicago, Illinois in 1969, and received her B.M. degree from the Oberlin Conservatory in Oberlin, Ohio in 1973, and her M.M. degree from the Eastman School of Music in Rochester, New York in 1978.

Wilkins taught as an assistant professor of music at Wilbur Wright College in Chicago, Illinois from 1979 to 1981. In 1987, she served as choir director at Mount St. Joseph Academy and in 1989, she developed a "concert-lecture" designed to introduce some of jazz's greatest composers. She has also given concert-lectures on "What Is This Thing Called Jazz - a History from New Orleans to Coltrane", "Black Women in Jazz" and "The Roots of Jazz - African Music, Spirituals and the Blues" for audiences in libraries, schools and colleges. Wilkins was professor of Ensembles at Berklee College of Music in Boston, Massachusetts.

Wilkins released four albums of her original compositions entitled SpiritJazz I, SpiritJazz II, Healin' Time and Praise Song on Tiphareth Records. Wilkins also composed music for The Search Goes On, an original musical performed at First Night 2000, for the NPR adaptation of Langston Hughes' Tell Your Mama, poet Phil Bryant's Southside Suite, and for Return, a Meditational Journey of Self Discovery for Black Women. The Wright College Choir, the Mt. St. Joseph Chorale, the Emmanuel College Singers, and the Shiloh Gospel Choir have also performed Wilkins’ compositions. She performed her jazz-influenced spiritual music weekly in her role as music director for the Jazz Worship Service at the First Church in Cambridge, Massachusetts. Her performance experience also included radio and television appearances with her group SpiritJazz, a concert tour of South America as a Jazz Ambassador for the U.S. State Department, performances as a percussionist with the Pittsburgh Symphony under Andre Previn and in shows featuring Melba Moore, Nancy Wilson and the Fifth Dimension. Wilkins performed at Boston's Regattabar, Scullers' Grille, the Globe Jazz Festival and the Many Colors of a Woman Jazz Festival. She has also appeared in concert at Harvard, Brandeis and Boston Universities, and was featured four times as a part of Boston's annual First Night Celebration.

Wilkins authored five books; Damn Near White: An African American Family’s Rise from Slavery to Bittersweet Success, They Raised Me Up: A Black Single Mother and the Women Who Inspired Her, both published by the University of Missouri Press, Melody for Murder and Mojo for Murder, both published by Pen-L Publishing, and Tips for Singers: Performing, Auditioning and Rehearsing.

Carolyn Wilkins was interviewed by The HistoryMakers on August 19, 2017.

See how Carolyn Wilkins is related to other HistoryMakers