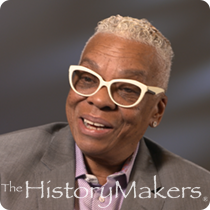 Favorite Color:
Yellow
Favorite Food:
Lobster
Favorite Time of Year:
Summer
Favorite Vacation Spot:
Anywhere other than work.
Favorite Quote:
That every talent god gave me I hope I have none left because I used it all.

Favorite Color:
Yellow
Favorite Food:
Lobster
Favorite Time of Year:
Summer
Favorite Vacation Spot:
Anywhere other than work.
Favorite Quote:
That every talent god gave me I hope I have none left because I used it all.

See how Carolyn Whigham is related to other HistoryMakers

Funeral director Carolyn Whigham was born on January 5, 1949 in Newark, New Jersey to Marie Foster Whigham and Charles Whigham. She attended St. Mary’s School, and was among the first African Americans to attend Vailsburg High School. Upon graduating in 1966, Whigham enrolled at Virginia State College in Petersburg, Virginia to study business administration, but left in order to pursue a career in mortuary science. Whigham earned her degree from the American Academy McAllister Institute of Funeral Service in New York City in 1986.

Whigham began working in her father’s funeral home, Whigham Funeral Home while still in high school. After leaving Virginia State College, Whigham married and lived in California for ten years. There, she and her then husband became successful real estate investors as the founders of Bennett and Bennett Associates, the largest black owned property management company in Los Angeles at the time. Upon her father’s retirement in 1986, Whigham became the director of Whigham Funeral Home. She oversaw the services for jazz singer Sarah Vaughn, as well as other celebrities from Newark, New Jersey. In 2003, she directed funeral services for John Russell Houston, Whitney Houston’s father. Whigham was called again by the Houston family to oversee funeral services for Whitney Houston in 2012, and her daughter Bobbi Christina Brown in 2015. She also oversaw the funeral of Congressman Donald M. Payne in 2012. She went on to host the “How to Conduct High Profile Funerals” seminars accredited by the New Jersey State Board of Mortuary Science. Whigham employed a predominately female staff, which included her wife, Terry Fields Whigham, and her daughter, Kara-Lynn Whigham. Over the course of her career as director, Whigham oversaw over 6,000 funerals at Whigham Funeral Home.

Whigham has been featured in The New York Times and the Star-Ledger. She was a member of the National Funeral Directors, Garden State Funeral Directors Association and Morticians Association, Inc, a professional organization for African American funeral directors. She also served on the New Jersey Board for the Statutes of Women. In addition, Whigham also worked with the Newark YMCA to establish housing for homeless people.

Carolyn Whigham was interviewed by The HistoryMakers on March 28, 2017.

See how Carolyn Whigham is related to other HistoryMakers
Click Here To Explore The Archive Today!