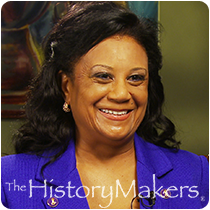 See how Carolyn Glenn is related to other HistoryMakers
Donate Now

Publisher and entrepreneur Carolyn Jernigan Glenn was born on June 28, 1947 in Greenesboro, Georgia to parents Flossie Hill and Albert Jernigan. In 1963, Glenn graduated from Carver High School at the age of sixteen. She went on to receive her B.S. degree in business education from Albany State University in Albany, Georgia in 1967. She then received two M.S. degrees from Georgia State University in Atlanta, Georgia, one in business and vocational education in 1972, and one in in educational administration in 1985. She is also licensed to practice real estate in Georgia and Florida.

Glenn spent twenty years working in public education, as a secretary, business teacher, vocational coordinator, and high school administrator. In 1991, Glenn and her husband, Dr. Earl Glenn, established ACE III Communications and founded The Champion Newspaper with Glenn as publisher. The Champion is Georgia’s largest African American-owned newspaper, and, since 1996, has been the most award-winning weekly among all newspapers in The Georgia Press Association. In 1999, they launched Atlanta Goodlife, a magazine focused on the lifestyles of African Americans in the Atlanta metropolitan area. In 2008, Glenn became the president of the Earl and Carolyn Glenn Foundation. Under the auspices of that foundation, she and her husband created Unconditional Love for Children, which provides opportunities for disadvantaged children to become empowered through educational enrichment programs, life skills training, athletics, and access to health services. She has been a log-time Foundation Board trustee and past chair at Georgia Perimeter College, and has endowed a perpetual scholarship for students at Albany State University.

Glenn has also been the recipient of numerous awards and honors. In 1994, she received the Benjamin Hooks Business Award from the DeKalb branch of the NAACP. In 1995, her newspaper won two Business of the Year Awards, one from the South DeKalb YMCA and another from 100 Black Men of DeKalb. That same year, Glenn was named Outstanding Entrepreneur by Success Guide. In 1996, she was named Businesswoman of the Year by the South DeKalb Business Association. The Atlanta Business League named her Businesswoman of the Year in 1997, and one of the 100 Top Black Woman of Influence from 1996 to 2014. She has also been named a Woman of Distinction by Living Word COGIC and listed among six influential Georgia women in Women Looking Ahead magazine. She won a Dr. Martin Luther King Jr. Humanitarian Award from Georgia Perimeter College in 2006, and a Trail Blazer Award from Congressman Hank Johnson in 2013.

Glenn lives in Stone Mountain, Georgia with her husband. They have one grown son, Christian.

Carolyn Jernigan Glenn was interviewed by The HistoryMakers on February 20, 2014.

See how Carolyn Glenn is related to other HistoryMakers
Donate Now
Click Here To Explore The Archive Today!