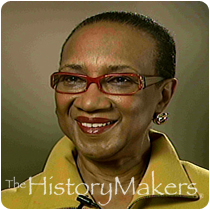 See how Carolyn Armenta Davis is related to other HistoryMakers

Curator, historian, lecturer, writer and producer Carolyn Armenta Davis is a native of Gary, Indiana and attended Froebel Public School from kindergarten until graduation from high school. Davis received her B.A. degree in mathematics from Indiana University in 1970.

After being a permanent high school substitute teacher from 1966 to 1970 in the Gary Community School District in Gary, Indiana, Davis moved to Chicago, Illinois, where she worked from 1970 to 1973 as executive staff of the American Medical Association’s Department of Community Health Care. For nine months in 1973, Davis was a television news writer for WMAQ-TV, the Chicago NBC affiliate. In 1974, Davis started her communications business in Chicago. She provided public relations, marketing communications, and media production services to national and international corporations, non-profits, and governments agencies, domestic and foreign.

Davis independently created, wrote and produced three landmark projects on accomplishments of men and women of the African Diaspora. Her debut project, The Black Classical Composers, was the first radio series on classical music written from 1771 to 1975 by Blacks and its 39, 1-hour programs aired from 1976 to 1977 on fine arts station WEFM-Chicago. In 1978, Davis did the Feminine Footprint radio series of mini-documentaries on 65 African American women trailblazers; it aired nationwide on 91 stations and earned the American Women in Radio and Television Award.

In 1990, Davis launched her Design Diaspora: Black Architects and International Architecture 1970-1990 ™ exhibition-lecture project on fifty contemporary African American, Black-European and African architects from eleven countries. From 1993 to 2000, Davis toured the Black Architects project to twenty venues in the Americas, Europe and Africa.

In 1997, Davis served on the design jury for the Organization for African Unity (OAU) and the United Nations Educational, Scientific and Cultural Organization (UNESCO), Union of International Architects (UIA), and Republic of Senegal International Competition for the Design of the Gorée Memorial Complex for Dakar, Senegal.

In 2002, the documentation of contemporary Black Diaspora women architects compiled by Davis was added to the archives of the Winifred Foundation in the Arthur and Elizabeth Schlesinger Library on the History of Women in America, Radcliffe College, Harvard University, Cambridge, Massachusetts.

Davis has served on several non-profit organizations’ boards. She is a member of numerous organizations including the Chicago Architecture Foundation, the Landmarks Preservation Council of Illinois, the Society of Architectural Historians, International Women Associations, Chicago; Old Town Triangle Association, Chicago; the Lincoln Park Renewal Corporation; and the NAACP.

Davis was interviewed by The HistoryMakers on November 21, 2008.

See how Carolyn Armenta Davis is related to other HistoryMakers
Click Here To Explore The Archive Today!