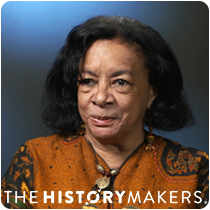 Favorite Color:
Blue
Favorite Food:
Fish and Chicken
Favorite Time of Year:
Spring
Favorite Quote:
Other People Were Not Put On This Earth To Ruin Your Life. They're Dealing With Their Own Stuff.$

Favorite Color:
Blue
Favorite Food:
Fish and Chicken
Favorite Time of Year:
Spring
Favorite Quote:
Other People Were Not Put On This Earth To Ruin Your Life. They're Dealing With Their Own Stuff.$

See how Carolyn Adams is related to other HistoryMakers

Dancer Carolyn Adams was born on August 16, 1943 in New York City to writer and composer Olive Arnold Adams and newspaper editor Julius J. Adams. She attended the Ethical Culture Fieldston School and studied dance at the Martha Graham School in New York City. Adams received her B.A. degree in 1965 from Sarah Lawrence College in Bronxville, New York, where she spent her junior year studying abroad at the Sorbonne in Paris, France. Later, she earn her M.S.W. degree from Fordham University in 2006.

In 1965, Adams joined the Paul Taylor Dance Company becoming the company’s first African American dancer. During her seventeen year career with the company, Adams starred in several major productions including Orbs in 1966, Big Bertha in 1971; Aureole and Esplanade in 1975; and Le Sacre du Printemps in 1980. In 1973, Adams co-founded the Harlem Dance Studio and Foundation with her parents and sister, Julie Adams Strandberg, who was also a professional dancer. The studio and foundation held dance classes, produced holiday musicals and organized community events to expose the area’s underprivileged children to the arts. Adams and her family also founded the Central Harlem Brownstone Preservation Committee. She left the Paul Taylor Dance Company in 1982, and became a professor of modern dance at The Juilliard School in New York City in the following year. In 1989, Adams became the founding artistic director for the School of Dance at the New York State Summer School of the Arts. From 1991 to 1993, she served as the dance director at the Jacob’s Pillow Dance Festival in Becket, Massachusetts. In 1993, Adams and her sister founded the American Dance Legacy Initiative at Brown University, which featured a series of instructional videos from well-known choreographers known as the Repertory Etude Collection. Adams went on to become a professor of modern dance at The Ailey School in New York City.

In 2005, Adams curated an exhibition on the New Dance Group for the National Museum of Dance in Saratoga Springs, New York. She served as co-chair of the New York State Blue Ribbon Commission on the Arts for the New York State Education Department and chaired the Dance/USA’s national task force on dance education. Adams also served as a panelist for the National Endowment for the Arts, the National Foundation for Advancement in the Arts and for the New York State Council on the Arts. In honor of her work and dedication to dance, Adams received many awards and honors including the Balasaraswati/Joy Ann Dewey Beinecke Endowed Chair for Distinguished Teaching in 2009 and the 2016 Dance Magazine Award for which her former student, dancer Robert Battle, choreographed the piece, For Carolyn, in her honor.

Carolyn Adams was interviewed by The HistoryMakers on June 26, 2018.

See how Carolyn Adams is related to other HistoryMakers