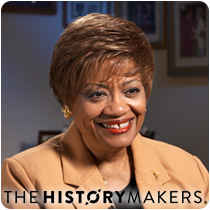 Motivational speaker and business consultant Carole Copeland Thomas was born on August 21, 1953 in Detroit, Michigan. Thomas graduated from Cass Technical High School in Detroit, Michigan, and went on to earn her B.A. degree in music, with honors, from Emory University in Atlanta, Georgia in 1975. Thomas enrolled at Northeastern University, in Boston, Massachusetts, on a Martin Luther King, Jr. academic fellowship, earning her M.B.A. degree in 1985.

Thomas began her career working in sales for Mary Kay Cosmetics, eventually becoming an independent sales director in 1975. Thomas moved to Boston with her then husband and family, working for the Bank of New England and The Gillette Company as an assistant product manager. Thomas founded Temporary Solutions, a temporary employment agency, in 1987. By 1989, the agency had grown into a full service speaking, training, and facilitation company called C. Thomas and Associates, specializing in diversity, multicultural, leadership, and empowerment issues. Thomas served as a town coordinator for Governor Deval Patrick’s 2006 campaign. In 2008, Thomas started The Multicultural Symposium Series (MSS), a face to face, online, and on the air initiative designed to advance the cause of multiculturalism. She hosted the weekly radio talk show “Focus on Empowerment” on Boston’s WILD 1090 AM radio, and subsequently on WBNW 1120 AM and Internet radio, from 2003 to 2009. Thomas has spoken at the Federal Highway Administration, SHRM, Hewlett Packard, Verizon, and Cargill, and Monster.com.

Thomas authored several books, including 21 Ways To Bring Multiculturalism To Your Job Your Home and Your Community and Real Women, Real Issues: Positive Collaborations for Business Success. She also served as the executive coach for the Essence Magazine Leadership Summit. Thomas became a life member of the National Black MBA Association in 1986, serving as president of the Boston Chapter, national vice chair, and a co-founder of the Leaders of Tomorrow program. She served as the Tri State coordinator for Delta Sigma Theta Sorority, and as the chair of the Multicultural Committee for the Greater Boston Convention and Visitors Bureau. Thomas also served as an adjunct professor at Bentley University.

Thomas has three children: Lorna, Michelle, and the late Mickarl, as well as two grandchildren, Julianna and Gabrielle.

Carole Copeland Thomas was interviewed by The HistoryMakers on October 18, 2016.

See how Carole Copeland Thomas is related to other HistoryMakers
Donate Now
Click Here To Explore The Archive Today!