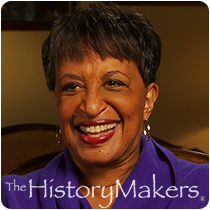 See how Carol Randolph-Jasmine is related to other HistoryMakers

Television anchor, journalist and literary agent Carol Randolph-Jasmine received her B.A. degree in biology from Fisk University in Nashville, Tennessee, and her M.A. degree in science education from Washington University in St. Louis, Missouri. She went on to earn her J.D. degree from the Columbus School of Law at Catholic University in Washington, D.C.

Randolph-Jasmine entered television broadcasting in the early 1980s as the co-host of the morning talk show, “Harambee,” which aired on WDVM-TV, a CBS affiliate in Washington, D.C. While there, she also worked as an anchorwoman and interviewed politicians and celebrities such as Senator Ted Kennedy, comedian Richard Pryor, former first ladies Roselyn Carter and Nancy Reagan, and musician Stevie Wonder. Randolph-Jasmine then joined Court TV, where she served as an anchorwoman, and as the host and moderator of the show, “Your Turn,” until 1986.

In 1987, Randolph-Jasmine joined the literary firm of Goldfarb, Signer & Ross (now Goldfarb, Kaufman & O’Toole), where she specialized in representing authors and clients in television from 1988 to 1991, and, during that time, she also wrote a bi-weekly column, “Metropolitan Life,” for the Washington Times. She then served as general counsel for New African Visions, Inc., the non-profit organization responsible for editing the book, Songs of My People (1992). She is the co-founder of Akin & Randolph Agency, LLC, a firm that represents authors, artists and athletes. Randolph-Jasmine was later appointed as the vice president of strategic communications for Miller & Long Concrete Construction, and was then named senior vice president of legal affairs for Walls Communications, Inc., a minority-owned public relations firm in Washington, D.C.

Randolph-Jasmine is a member of the Pennsylvania Bar Association, the District of Columbia Bar Association, and The Links, Inc., where she served as chair of the Hurricane Katrina Relief Committee. In 2005, she launched a “Construction Academy” at Cardoza Senior High School in Washington, D.C. for students interested in the construction business. Randolph-Jasmine is also a member of the board of directors for the Center for Dispute Resolution.

As co-host of “Harambee” in the 1980s, Randolph-Jasmine won several awards including an Emmy Award and the George Foster Peabody Award for “Outstanding Local Programming.”

Carol Randolph-Jasmine was interviewed by The HistoryMakers on December 5, 2013.

See how Carol Randolph-Jasmine is related to other HistoryMakers
Click Here To Explore The Archive Today!