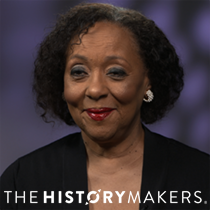 See how Carol Jenkins is related to other HistoryMakers
Donate Now

Television host and reporter Carol Jenkins was born on November 30, 1944 in Montgomery, Alabama to Elizabeth Gardner Jenkins and John Young. Jenkins moved with her mother and stepfather, Edwin Jenkins, to New York City in 1947, where she graduated from the Springfield Gardens Academy in 1962. Jenkins then earned her B.A. degree in speech pathology from Boston University in 1966, and her M.A. degree in speech pathology from New York University in 1968.

Jenkins began her career in broadcast television in 1970, working as a researcher and reporter for WWOR-TV in New York City. The following year, Jenkins became the co-host of WWOR-TV’s Straight Talk, one of the first daily public affairs programs in New York City. In 1973, Jenkins was hired as the co-host of Positively Black at WNBC-TV. She also worked as an anchor and reporter for the station, traveling to South Africa in 1990 to cover Nelson Mandela’s release from prison. Jenkins then joined WNYC-TV in 1998, where she worked as a reporter and anchor, in addition to hosting her own daily talk show, Carol Jenkins Live. After retiring as a television host and reporter in 2000, Jenkins founded her own media consulting business, Carol Jenkins & Company. In 2003, Jenkins served as an executive producer of the PBS documentary What I Want My Words To Do To You. One year later, Jenkins and her daughter, Elizabeth Gardner Hines, co-authored the book Black Titan: A.G. Gaston and the Making of a Black Millionaire, about her maternal uncle, prominent southern businessman A.G. Gaston. Jenkins served as the founding president of the Women’s Media Center from 2006 to 2009; and in 2010, she founded a media consulting firm called caroljenkins:media. In 2016, Jenkins became the host of the television show Black America on CUNY TV.

Jenkins served on the board of directors of the Women’s Media Center, and chaired the board of directors for GreenStone Media LLC and the African Medical & Research Foundation. Jenkins was a recipient of the 2008 National Council on Women’s Organizations Women’s Equality Award; and in 2009, she received the North Star News Prize from the North Star Foundation. She was also a recipient of the Ida B. Wells Bravery in Journalism Award from Women’s eNews and a United Nations Foundation press fellowship in global health issues.

Carol Jenkins was interviewed by The HistoryMakers on April 29, 2018.

See how Carol Jenkins is related to other HistoryMakers
Donate Now